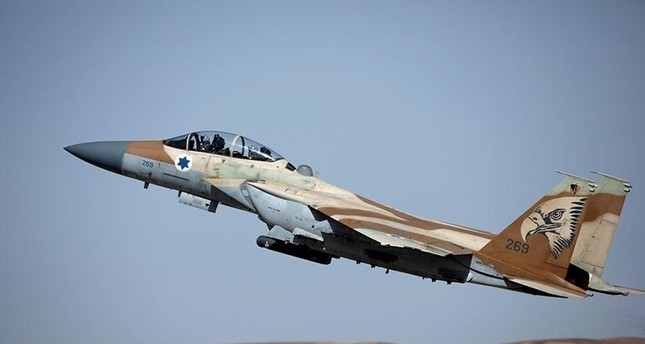 Israel's military said Monday it carried out an air strike on an anti-aircraft battery in Syria east of Damascus after it fired toward its planes.

The Syrian regime said later in the day that the Israeli warplanes violated its airspace, and thus were targeted.

"The aircraft of Israel's Air Force violated our airspace near the border with Lebanon in the Baalbek area at 08:51 a.m. local time (05:51 GMT), and therefore were attacked by our air defense systems," the statement said, adding that one of the Israeli planes was hit, and the shot forced it to leave.

Israeli planes were on what the military described as a routine reconnaissance mission over neighboring Lebanon when an anti-aircraft missile was fired in their direction, a military spokesman said.

The planes returned safely, according to the spokesman, adding it was believed the anti-aircraft battery in Syria was destroyed.

"We hold the Syrian regime responsible for the anti-aircraft fire and any attack originating from Syria," Israeli military spokesman Lt. Col. Jonathan Conricus told journalists. Russian forces in Syria were notified in real time, he added.

Conricus said Israel has no interest in destabilizing the situation but says the military will "preserve our ability to act and thwart" any hostile activity against it.

Israel has sought to avoid becoming more directly involved in the six-year civil war in neighboring Syria, though it acknowledges carrying out dozens of air strikes to stop what it calls advanced arms deliveries to Hezbollah.

The Lebanese Shiite group, which fought a devastating war with Israel in 2006, is backing Bashar Assad's regime in the conflict.

Israel has also occasionally carried out limited reprisals along its frontier with Syria in the Golan Heights, after spillover of Syria's fighting.

But such a strike deep in Syrian territory is highly unusual.

Monday's strike comes with Russian Defense Minister Sergei Shoigu due to visit Israel later in the day. Russia is also backing Assad in the Syrian conflict.

Russia and Israel have established a hotline to avoid accidental clashes in Syria.