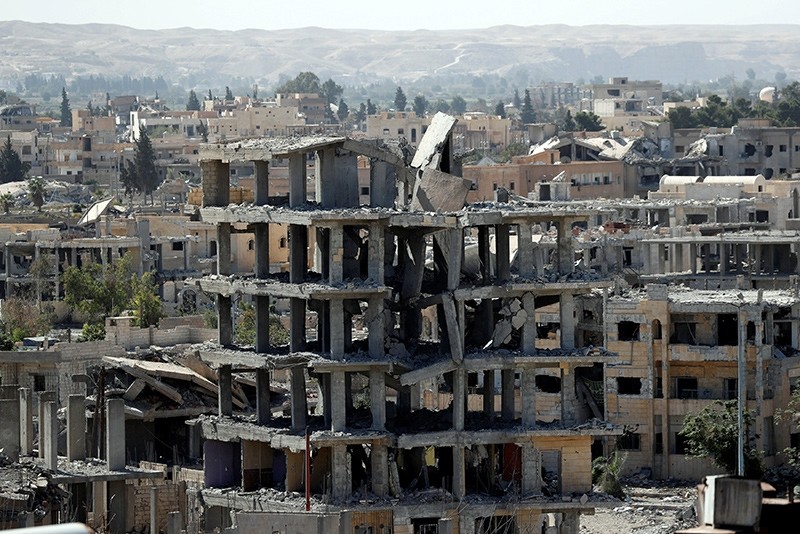 A commander with the U.S.-backed forces battling the Daesh group says the city of Raqqa has been liberated from Daesh militants and that combing operations are underway to clear the city of land mines and terrorist sleeper cells.

The U.S.-backed Syrian Democratic Forces (SDF), which is predominantly led by the PKK terror group's Syrian affiliate the Democratic Union Party (PYD) and its armed wing People's Protection Units (YPG), has been fighting Daesh inside Raqqa since June. In the campaign, the city suffered major devastation, leaving most of its buildings leveled and in ruins.

Brig. Gen. Talal Sillo told The Associated Press on Tuesday that there are no longer clashes going on in the city. Sillo says a formal declaration will follow befitting "the fall of the capital of terrorism."

Dozens of militants who refused to surrender had made their last stand in the city's stadium, which had become notorious as a prison and dungeons for the group. It wasn't immediately clear if the Daesh militants are still holed up inside the stadium.

The Syrian Observatory for Human Rights said Tuesday also confirmed that Daesh has been cleared from Raqqa. The battle has left at least 3,250 people dead, with at least 1,130 of them are civilians, the SOHR added, sating that hundreds more were still missing and may have been buried alive in their homes by shelling, bombs and air strikes.

The breakthrough in the operation to retake Raqqa came after a deal was struck allowing the evacuation in recent days of civilians who had been held as human shields.

Under the deal, a total of 275 Syrian Daesh fighters and relatives also surrendered to the SDF, though it was unclear whether they would be given safe passage elsewhere.

Losing Raqqa has been a huge blow for Daesh, which has steadily lost territory in Iraq and Syria, including Iraq's second largest city of Mosul few months ago. The group declared the city on the banks of the Euphrates River, which it seized from other Syrian opposition fighters in early 2014, to be the capital of its self-declared"caliphate," transforming the once vibrant metropolis into the epicenter of its brutal rule where opponents were beheaded and terror plots were planned.

On Monday, the SDF captured "Paradise Square," Raqqa's infamous public square where Daesh militants used to perform killings and beheadings, forcing residents to watch after summoning them with loudspeakers.

The U.S.-led coalition said it had not carried out any airstrikes in or around Raqqa for 24 hours, starting from noon Sunday.

The terrorist group also suffered setbacks Tuesday in the eastern Syrian region of Deir el-Zour, where Russian-backed regime forces retook swathes of territory, further reducing a "caliphate" that three years ago was roughly the size of Britain.

The Syrian Observatory for Human Rights stated that regime forces had brought the entire area stretching between Deir el-Zour and Mayadeen, which was retaken on Saturday, under their control following a major military offensive.

"These are not desert areas, they are villages along the Euphrates (river) that were Daesh strongholds," the Britain-based monitoring group said.

"The Daesh group is collapsing under pressure from the regime in Deir el-Zour province," it said.

Daesh also controls territory in neighboring regions on the Iraqi side of the border, where they are facing another U.S.-backed offensive by Iraqi pro-government forces.