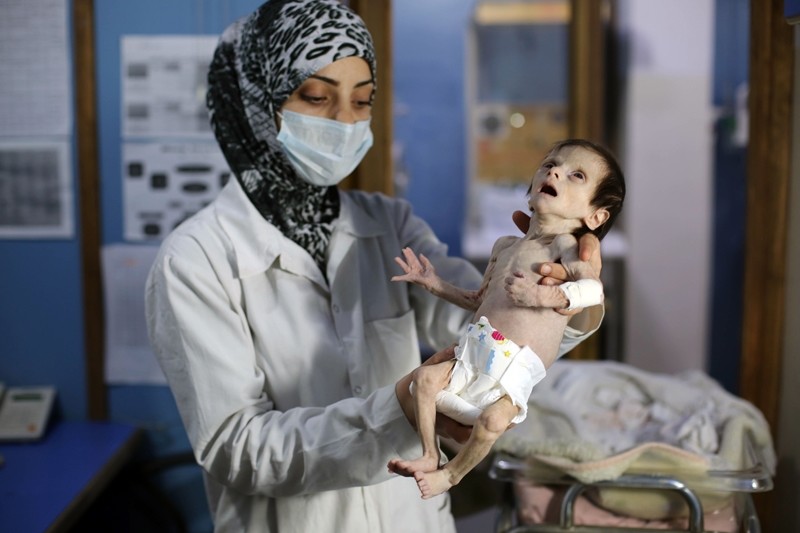 A Syrian infant suffering from severe malnutrition is carried by a nurse at a clinic in the town of Kafr Batna, in the eastern Ghouta region on the outskirts of the capital Damascus (AFP Photo)
by Oct 23, 2017 12:00 am

More than 1,100 children are suffering from acute malnutrition in the besieged opposition-held Eastern Ghouta area outside the Syrian capital, the UN's children's fund UNICEF told AFP on Monday.

Based on surveys done in recent months, the body said 1,114 children were suffering from various forms of malnutrition, including the most dangerous form, known as "severe acute malnutrition".

Spokeswoman Monica Awad said assessments in the past three months found 232 children suffering severe acute malnutrition, a level of undernourishment that requires urgent treatment if the child is to survive.

Another 882 were suffering moderate acute malnutrition, with more than 1,500 other children at risk, Awad said.

"During the past month, there has been two reported deaths among infants, one girl aged 34 days and a boy aged 45 days, due to insufficient breastfeeding," Awad said.

"Mothers also don't have access to quality food, making them frail and unable to breastfeed their children."

Sahar Dofdaa, just 34 days old, died on Sunday at a hospital in the Eastern Ghouta town of Hamouria.

Images filmed by a reporter working with AFP showed a wide-eyed girl with listless eyes and little but skin on her bones.

She tried to cry but lacked the strength to make much of a noise. Her young mother sobbed nearby.

Her skeletal thighs poked out of a nappy way over her size. Placed on the scales, she weighed less than two kilograms (just over four pounds).

Her mother was too undernourished to breastfeed her and her father, earning a pittance at a butcher's shop, was unable to afford milk and supplements.

She died at the hospital on Sunday morning and her parents took her -- their only child -- to their nearby town of Kafr Batna to bury her.

Up to 400,000 people are believed to live across Eastern Ghouta, one of the last remaining opposition strongholds in Syria.

The area has been under siege by Bashar Assad's force since 2013, causing food and medical shortages and skyrocketing prices for what is produced locally or smuggled in.

Aid convoys have rarely been able to access the region, which was once known as a prime agricultural area.

On September 23, a convoy carrying food and medical aid for some 25,000 people entered three besieged areas of Eastern Ghouta, according to the UN.

But Awad said "it was not sufficient to meet the needs of all children."