World looks on as hundreds starve to death in Eastern Ghouta 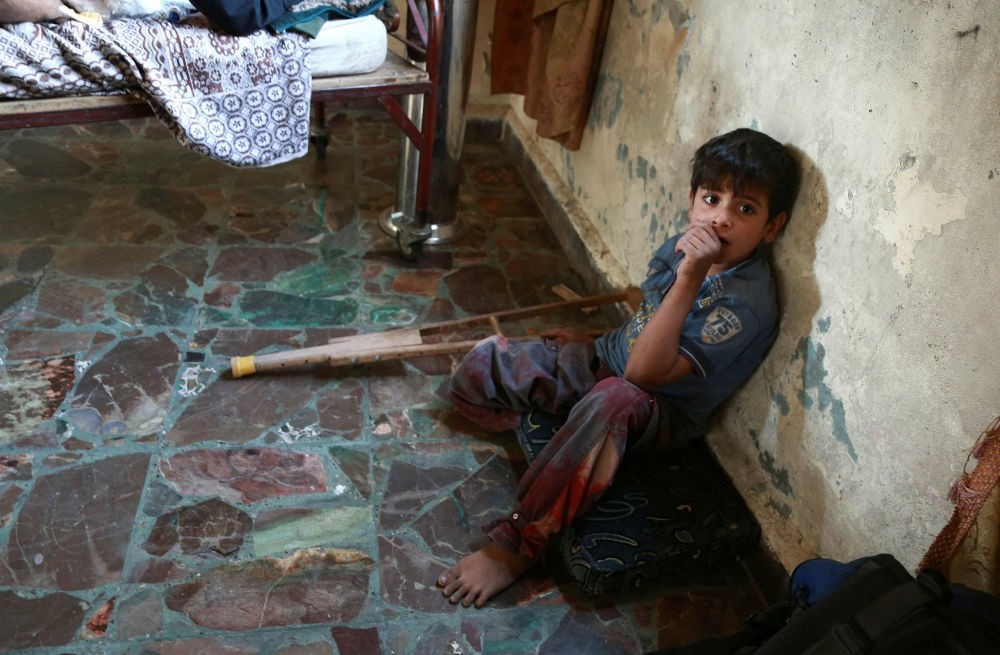 Some 206 children were reportedly killed due to malnutrition caused by the Syrian's regime blockade of East Ghouta.
by Yusuf Selman İnanç Oct 25, 2017 12:00 am

Since the Syrian civil war began in 2011, sieges and starvation have been used as a tool of war. Placing cities under siege and cutting off access to roads, food and medical supplies have left humanitarian aid providers unable to reach the trapped population of civilians not allowed to leave the cities. As previously seen in the provinces of Fua, Kefaya and Yarmouk, East Ghouta has been the latest victim in the crisis, with thousands of people being deprived of food and medical supplies, resulting in the deaths of many civilians, particularly infants and the elderly. The recent photographs of two infant girls' dead bodies have shaken the world, the two dying of starvation as a result of the siege.

The graphic images were circulated on social media, international organizations paid more attention to the ongoing crisis, and Anadolu Agency (AA) has reported that as many as 397 civilians, including 206 children and 67 women, have died of hunger while thousands of others struggle to survive. The Syrian regime has tightened its blockade in recent months, preventing residents from bringing in their daily needs through tunnels or intermediary merchants. As a result, one-month-old infant Sehar Difda died of malnutrition on Sunday. Local medic Dr. Yahya Abu Yahya told AA that the baby was malnourished, unable to breastfeed as his mother had suffered from malnutrition due to the crippling siege.

An AA cameraman captured the last moments of the baby's life. The infant appeared lethargic and thin, and was later buried by his family early Sunday. Another infant, Ubeyde, also died of malnutrition early Sunday, according to an Eastern Ghouta media center. "Infant mortality rates have increased dramatically due to the lack of milk and food," the center said in a statement. Dr. Ismail Hakeem, a doctor with Al-Hakim Emergency Hospital, said doctors are trying to make medicines from wheat, rice and sugar. "Unfortunately, the medications were costly and inadequate, meeting only 10 percent of our needs," he said.

In addition to the regime's siege, businesses are also accused of keeping prices high under the pretext of shortages. "The activists blame a four-year government siege and the greed of local businessmen who hide food and medical products in orders to raise prices, for malnutrition mostly among children," Rami Abdurrahman of the Britain-based Syrian Observatory for Human Rights said, adding that the suffering is primarily the result of the government siege, adding that there are businessmen who are taking advantage of the food shortage," The Associated Press (AP) reported. Ahmad Khansour, a Ghouta-based opposition activist, speaking to The AP said that "high prices are far beyond people's reach, saying that a single kilogram (2.2 pounds) of sugar is selling for up to $12, while a kilogram of rice sells for nearly $5. He said the family's monthly income is about $100."

The U.N. Office for the Coordination of Humanitarian Affairs (UNOCHA) estimates that 13.5 million people are in need of humanitarian aid in Syria and more than 5 million of them live in hard-to-reach areas. Aid convoys are generally refused entry by the regime forces and there have even been claims that the regime is taking the humanitarian aid for its own soldiers. The UNOCHA estimates more than 500,000 people live in besieged areas at various locations.

Although the U.N. considers the siege and deprival of water and food as a war crime, there has been no successful attempt to break the siege. The failure of aid deliveries points to the U.N.'s difficulty in tackling the humanitarian crisis. "A convoy of 42 trucks providing aid, operated by the Syrian Arab Red Crescent, the International Committee of the Red Cross and the U.N., was allowed to enter some areas of Eastern Ghouta in late September, delivering food, school supplies and children's clothing to 25,000 people in three besieged towns. However, this is only a small proportion of the estimated 400,000 people in the area," Al Jazeera reported two days ago.

In March 2011, Syrians became emboldened enough to rise up against the dictatorship. However, the regime's response was not as peaceful as the protesters', resulting in the country being subsequently dragged into a deadly civil war after opposition groups took up arms against the government. Opposition groups have also been divided internally and their infighting, especially in East Ghouta, has helped the regime consolidate the siege, according to reports.