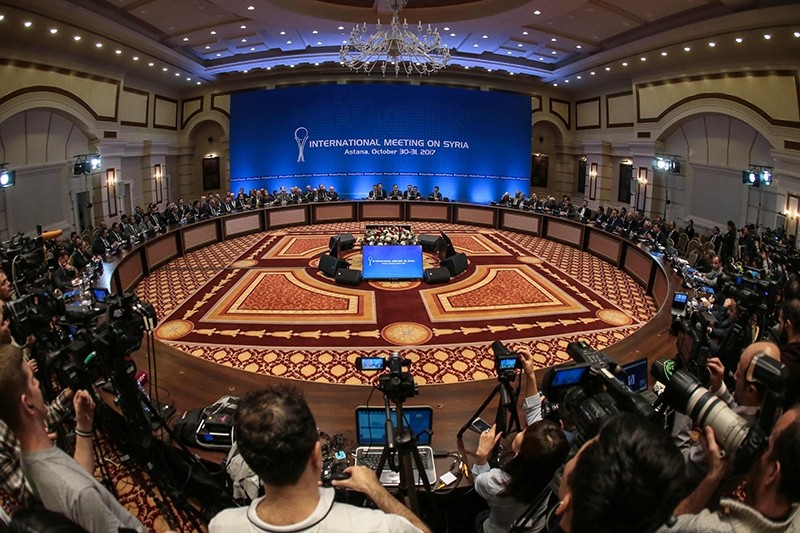 Representatives of the Assad regime and Syrian opposition groups along with other attendees take part in the session of Syria peace talks, Astana, Kazakhstan, Oct. 31, 2017. (AFP Photo)
by Anadolu Agency
Nov 01, 2017 12:00 am

A seventh round of Syria peace talks ended without an agreement Tuesday in the Kazakh capital Astana.

Parties attending the talks failed to reach an agreement on uninterrupted humanitarian access to the regions under blockade, and the exchange of captives and prisoners, according to sources who attended the meeting.

The guarantor countries —Turkey, Russia and Iran — agreed to continue to work on the two issues, the sources said.

Reading a joint statement from the three countries, Kazakh Foreign Minister Kairat Abdrakhmanov said they welcomed progress in the implementation of the memorandum on the creation of de-escalation areas in Syria reached May 4.

The countries emphasized the "significant" reduction of violence on the ground in Syria as a result of measures taken to strengthen and maintain the cease-fire regime, including launching the de-escalation areas and creating the security zones, the Kazakh minister said.

The countries reaffirmed their determination to take all necessary measures to continue to fight against terrorism within and outside the de-escalation areas.

They also agreed that there was "no" military solution to the Syrian issue and that it should be solved through political process.

Abdrakhmanov said the countries agreed to discuss Russia's proposal to convene a "Congress of the national dialogue".

He said conflicting parties needed to take "confidence‑building measures" including the release of detainees/abductees and the handover of the bodies as well as identification of missing persons, to create better conditions for political process and lasting cease-fire.

The three countries also underlined the necessity to further increase the international humanitarian aid to Syria, and to provide rapid, safe and unhindered humanitarian access.

During a news conference after the talks, Russian Special Envoy for Syria Alexander Lavrentiev said the National Dialogue Congress would be held in Russia's Sochi city.

The envoy said that the formation of a transitional government of national unity would be negotiated at the congress, adding "the initiation of constitutional reform in particular is very important".

Lavrentiev said the issue was also discussed with U.N. Special Envoy for Syria Staffan de Mistura. "Mistura also said that we should focus on constitutional reform and elections."

According to the Russian Foreign Ministry, the congress will be held on Nov. 18.

Addressing the Syrian opposition delegation, Lavrentiev said they did not want any preliminary conditions.

"If they are going to set preliminary conditions, and not have a constructive attitude, then they will prove that they are turning down a helping hand. We do not want this to happen.

"We will continue to work with the Syrian opposition ... If the opposition side does not attend, they will be at great risk and be out of the political process."

Syria's armed opposition, on the other hand, objected to Russia's congress call saying that Russia should stop the killing of Syrian children in the first place, referring to recent attacks by the Syrian regime in the Damascus suburb of Eastern Ghouta.

According to spokesman Yahya Al-Aridi, the opposition group wants to maintain the Geneva and Astana talks, with no changes to the process.

As for joining the congress, Aridi said it was "not actually a choice."

"It's not about choosing whether or not to attend it. There are definite boundaries. It is claimed to be led by the U.N., but no one can predict who will join it," he said.

The next round of Astana talks is expected to be held in the second half of December.

The Astana talks, which focused on strengthening a cease-fire that came into effect on Dec. 30, were brokered by Turkey, which backs the opposition, and Russia and Iran, who support the Assad regime.

The two-day meeting in Astana also addressed the release of prisoners and hostages, and humanitarian action on mines.

Representatives of the Assad regime, armed opposition groups, the three guarantor countries, as well as delegations from the U.N., Jordan and the U.S. attended the talks.