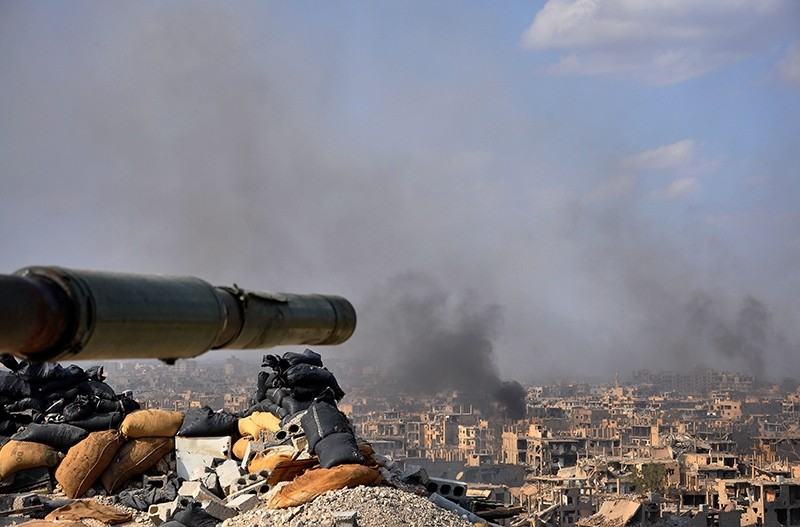 Smoke billows from the eastern city of Deir el-Zour during an operation by the Assad regime against Daesh terrorist group, Nov. 2, 2017, Deir el-Zour, Syria. (AFP Photo)
by Compiled from Wire Services
Nov 03, 2017 12:00 am

"The army announces full control of Deir el-Zour city," state television said in a breaking news alert, citing sources on the ground in the city.

"The armed forces, in cooperation with allied forces, liberated the city of Deir el-Zour completely from the clutches of the Daesh terrorist organization," a military source said.

Daesh had for years besieged a regime enclave in the city until the army relieved it in early September, starting a battle for the terrorist-held parts of the city.

The regime captured al-Hamidiya, Sheikh Yassin, al-Ardhi and al-Rashidia districts in recent attacks and the al-Hawiqa district was the last to be held by the terrorists, a military media unit run by the army's ally Hezbollah reported.

Deir el-Zour, on the west bank of the Euphrates, is the largest and most important city in eastern Syria. It is the center of Syrian oil production.

An offensive by the army, backed by Russia, Iran and Shiite militias, and a separate offensive by U.S.-backed Syrian Democratic Forces (SDF), which is dominated by terrorist PKK's Syrian offshoot, have pushed Daesh back into a shrinking pocket of land downstream of Deir el-Zour near the Iraqi border.