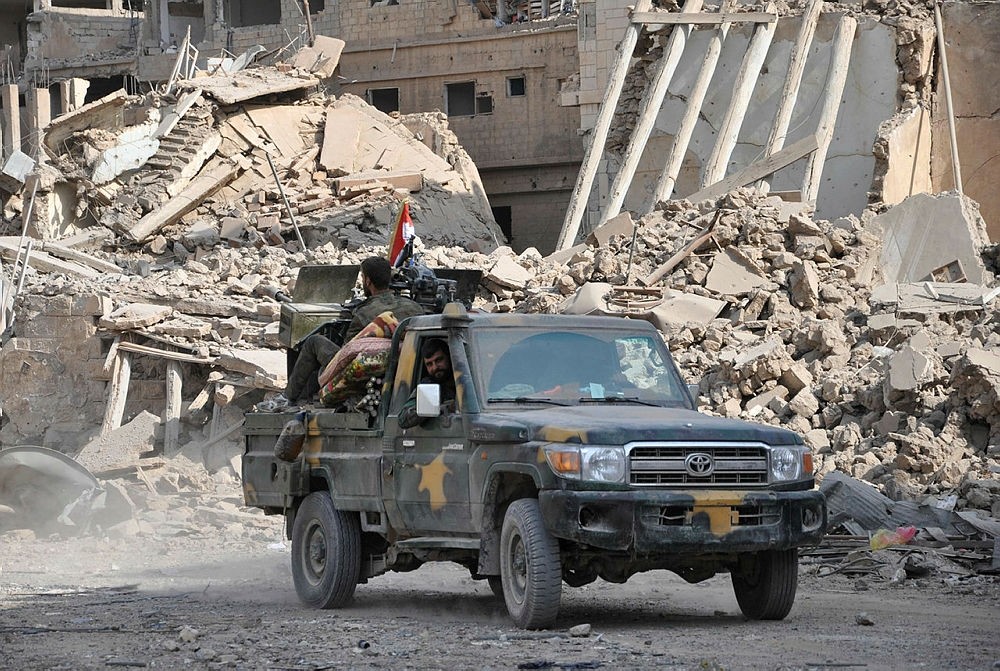 Assad regime troops and allied militiamen on Wednesday encircled the Daesh group in Albu Kamal, state media said, edging closer to ousting the terrorists from their last urban stronghold in the country.

Albu Kamal lies on the Syrian side of the border with Iraq, in the oil-rich eastern province of Deir el-Zour.

After a series of defeats in the province and the loss of Daesh's de facto capital Raqqa further north, Albu Kamal is the only Syrian urban centre left in the hands of the terrorists.

"Army troops and allied forces have completely encircled Daesh terrorists in Albu Kamal and have begun operations to eradicate them from the town," state news agency SANA reported, using an Arabic acronym for Daesh.

Syrian regime forces, backed by intensive Russian air strikes, have advanced on the town from the south and west for weeks.

And Iraqi forces have closed in on the border area from the east, seizing the town of Al-Qaim from the terrorists last week.

"The advance towards Albu Kamal came after army troops and their allies met up with Iraqi forces at the border between the two countries," SANA said Wednesday.

A source from the militias allied to Damascus told AFP that fighters from Lebanon's pro-regime Hezbollah movement had advanced to the southern edges of Albu Kamal on Wednesday.

"Part of those units crossed into Iraq, with the help of Hashed al-Shaabi units, to circle around Albu Kamal and reach the northern side of the town," the source added.

The Hashed al-Shaabi paramilitary alliance has denied that its own forces entered Syria on Wednesday as part of the fight.

Daesh overran vast swathes of oil-rich Deir el-Zour province in 2014 during a military sweep across Syria and Iraq, where it declared a self-styled "caliphate".

But the terrorist group has seen that territory shrink down to a small pocket along the Euphrates River, with Albu Kamal as its final hub.

Tens of thousands have been displaced by fighting to oust Daesh from the area, many living in desperate conditions in desert camps.

In recent weeks, an estimated 120,000 people have been displaced from Albu Kamal alone, said Linda Tom from the United Nations' humanitarian affairs coordination office in Damascus.

On Friday, Syrian forces backed by Russian air power took full control of Deir el-Zour, which was the last city where Daesh still had a presence.

The US-led coalition that has been fighting Daesh in an offensive separate to that of the Russian-backed regime estimated recently that there were 1,500 terrorists in the Euphrates Valley border area.

Moscow is a close ally of the Assad regime and launched a military intervention in support of it in September 2015.

More than 330,000 people have been killed in Syria since the conflict began in March 2011 with anti-regime protests, before spiralling into a complex, multi-front war that drew in international forces and terrorists.