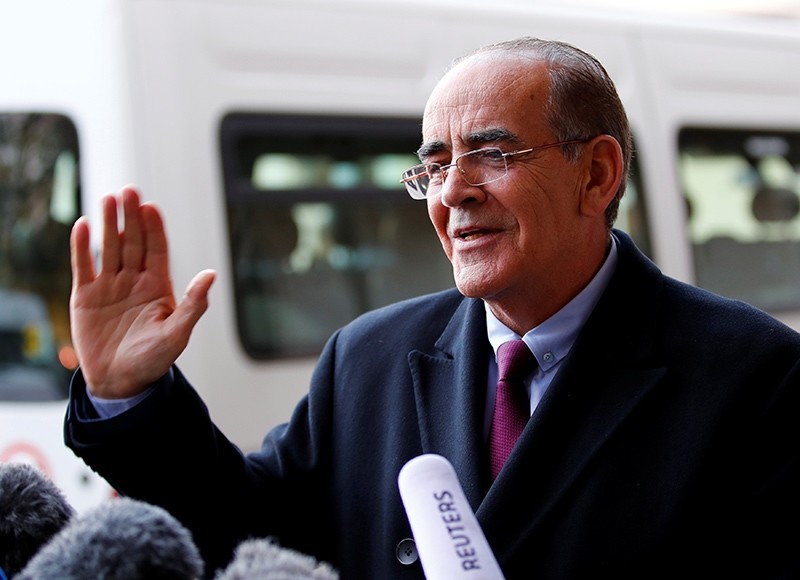 Yahya Aridi spokesman of the Syrian Negotiation Commission (SNC) arrives for a meeting during the Intra Syria talks in Geneva, Switzerland, Dec. 1, 2017. (Reuters Photo)
by Compiled from Wire Services Dec 04, 2017 12:00 am

The decision by President Bashar al-Assad's negotiators to quit U.N.-led talks in Geneva last week was an embarrassment to Russia, which is in a hurry to find a solution, opposition spokesman Yahya al-Aridi told Reuters on Monday.

The government delegation blamed its departure on the opposition's uncompromising stance on Assad's future, but Aridi said they would return if they felt any responsibility to the Syrian people or the international community.

The Assad regime delegation left the talks in Geneva on Saturday, their chief negotiator announced, without clarifying if or when they will return.

"This round of talks is finished for us," Bashar al-Jaafari told reporters Friday, adding that the regime would decide whether his delegation would fly back to Geneva on Tuesday.

The current talks involving the government and opposition have not brought any concrete progress since they started last week.

U.N. mediator Staffan de Mistura has said that the government side might fly back for consultations over the weekend, but that he plans to resume talks Tuesday.

Jaafari criticized de Mistura for having presented his own framework document without consulting each side about their views.

"The special envoy exceeded his authority by presenting his own paper," Jaafari said. "We don't negotiate with the mediator, we negotiate through him."

The Geneva talks began in 2014 and six previous rounds of U.N.-backed negotiations have failed to yield concrete results, while hopes for a major breakthrough remain bleak.

Since March 2011 when civil war erupted in Syria, more than 300,000 people have been killed, according to the U.N. The Syrian Center for Policy Research puts the death toll at more than 470,000. Despite the heavy toll of the Syrian civil war on both sides, the Assad regime has also gained momentum. Over the last year, Assad has strengthened his position on the ground, while opposition forces are reeling from a major setback in the capital city of Damascus.