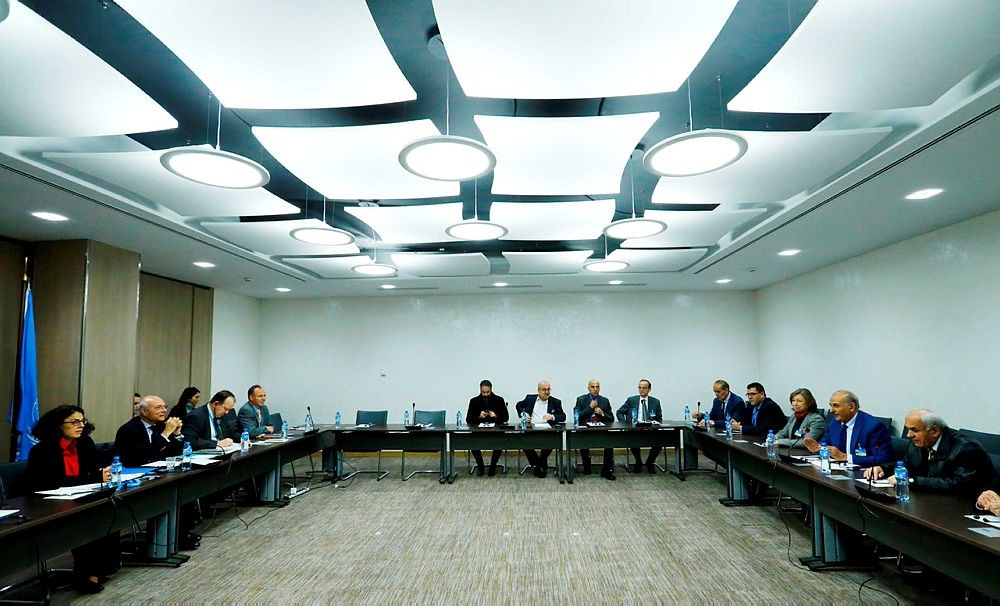 Members of the delegation of the Syrian Negotiation Commission (SNC) attend a meeting with United Nations Deputy Special Envoy for Syria Ramzy Ezzeldin Ramzy (2L) during the Intra Syria talks in Geneva, Switzerland, Dec. 1, 2017. (AFP Photo)
by Dec 06, 2017 12:00 am

France accused the Assad regime on Wednesday of obstructing U.N.-led peace talks with its refusal to return to Geneva and called on Russia not to shirk its responsibilities to get the regime to the negotiating table.

Talks on ending the war in Syria resumed on Wednesday, but with no sign of the regime negotiators returning to the table in Geneva.

The process began last week. But after a few days with little apparent progress, the U.N. mediator Staffan de Mistura said the Assad regime delegation led by Bashar al-Jaafari was returning to Damascus to "consult and refresh."

"France condemns the absence of the delegation of the regime and its refusal to engage in good faith in the negotiations to achieve a political solution," French foreign ministry deputy spokesman Alexandre Georgini told reporters.

"This refusal highlights the obstruction strategy of the political process carried out by the Damascus regime, which is responsible for the absence of progress in the negotiations," he added.

He said Russia, as one of the Assad's main backers, needed to assume its responsibilities so that the regime finally entered the negotiations.

De Mistura had said he expected talks to resume "around Tuesday" Dec. 5, but Jaafari said before leaving that he might not come back because the opposition had stated that Assad could not play a role in a future interim government.

During last week's sessions, de Mistura shuttled between the representatives of the two warring sides, who did not meet face-to-face. He had planned to continue the round until Dec. 15.