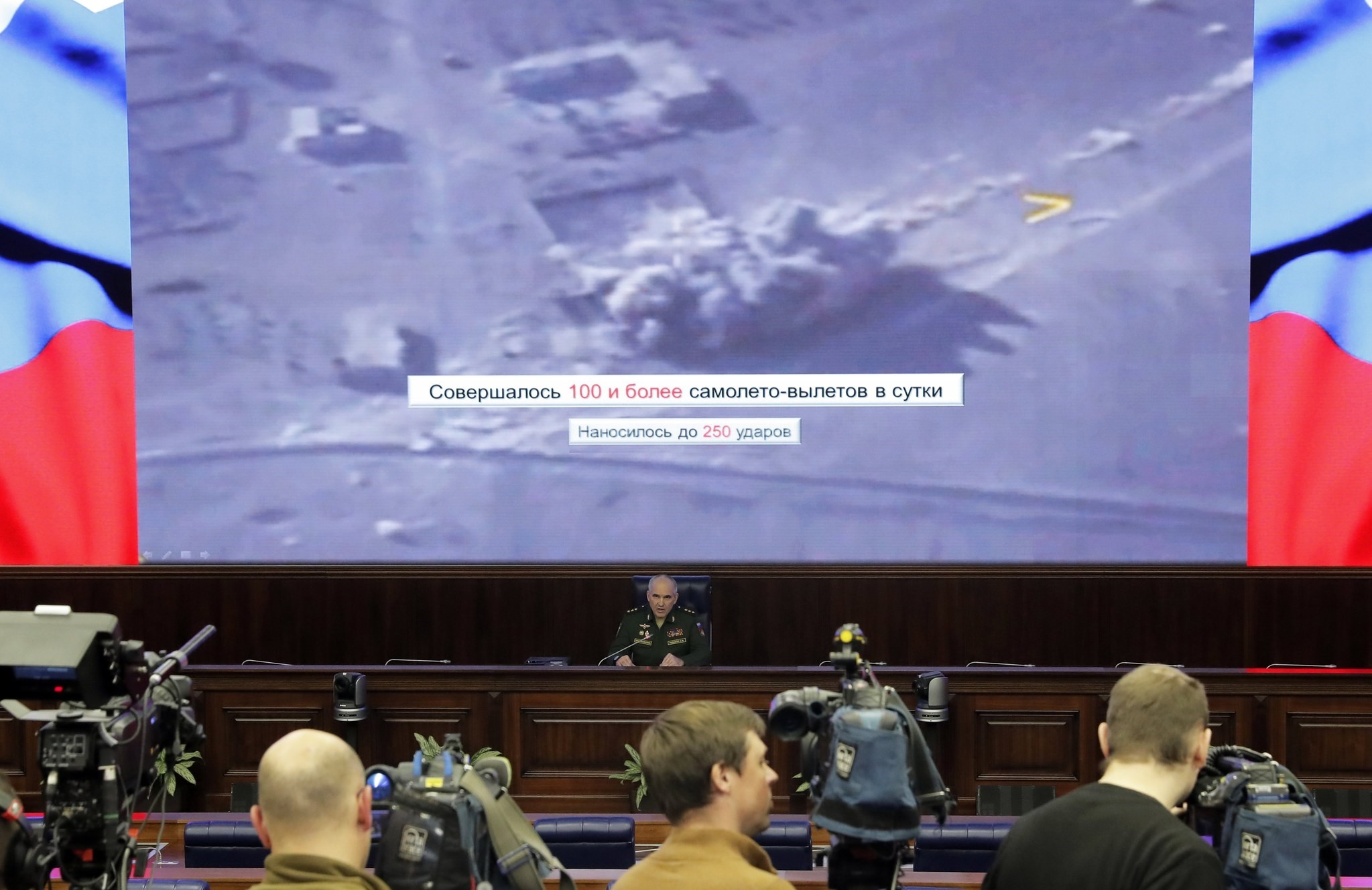 Chief of the Main Operational Directorate of the General Staff of the Russian Armed Forces Colonel General Sergei Rudskoy (C) holds a media briefing on the fight against terrorism in Syria, Russia, 07 December 2017. (EPA Photo)
by Compiled from Wire Services
Dec 07, 2017 12:00 am

Russia announced on Thursday once again that it had accomplished its mission in Syria with 2,500 square kilometers of Syrian territory liberated from the Daesh terror group over the past week.

Russian General Sergei Rudskoi told reporters that his country's forces would now focus on "providing assistance to the Syrian people in restoring civilian life and ensuring compliance with the cessation of hostilities agreements," according to comments carried by state news agency TASS.

"Syria's territory has been completely liberated from militants of this terrorist organization (Daesh)," Rudskoi said.

He added that Russia was prepared to deal with individual cells of the terrorist group if they would appear in the future.

The Russian claim has been disputed by the Syrian Observatory for Human Rights, a war monitoring group.

"This a big lie," the watchdog said. "Russia is trying to hide the fact that the [IDaesh] terror organization continues to exist on the Syrian land."

Daesh terrorists still control 3 per cent of Syria's territory, according to the Observatory.

It added that Daesh is active in five Syrian provinces including Damascus, especially on the city's southern edges in the al-Yarmouk refugee camp as well as al-Tadmoun and Hajr al- Aswad neighborhoods.

The terror group has insurgents near Syria's border with Israel, the monitor said.

The UN's Syria envoy Staffan de Mistura said at a press conference in Geneva that winning territory back from Daesh did not stamp out the terrorists' influence or preclude them from re-appearing in the future in a different form.

"To win territorially against Daesh is one thing," de Mistura said.

But "to stop any chance for it to actually start again under another name and under another person requires a credible political process, constitution, parliamentary presidential elections under UN supervision," he said.

De Mistura said he expected the Assad regime and the opposition to "seriously engage" in negotiations next week focused on the new constitution and elections, warning both sides against "sabotaging" the process.

The Assad regime said Thursday that its negotiators would fly to Geneva on Sunday for the negotiations, which were halted last week before reopening Tuesday without the regime team.

Syria's delegation has called the opposition's insistence on Assad's removal "provocative" and "irresponsible."

Russia began its bombing raids in September 2015 in support of Assad's beleaguered forces.

Those strikes have helped the regime regain control over much of the war-ravaged country.

Russia has also repeatedly claimed mission accomplished in Syria since entering the bloody, multi-sided civil war on the side of the Assad regime.

In March 2016, just nine months after Russia began bombing raids against terrorists in Syria, Russia announced that its mission had been largely accomplished. Russia said it was pulling out the majority of its forces from the country. Soon thereafter, it appeared that Russia was continuing operations as usual.

Last month, President Vladimir Putin said efforts to end the war were entering a "new stage" as the focus shifted from military intervention to political reform.

More than 340,000 people have been killed since the conflict broke out in March 2011 with protests against Assad's rule that sparked a brutal crackdown.