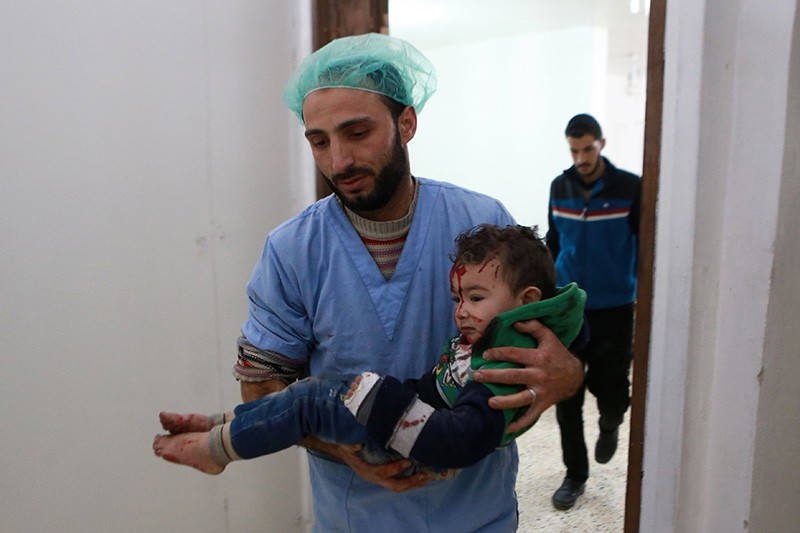 A Syrian child receives treatment at a hospital following a reported air strike in the rebel-controlled town of Arbin, in the eastern Ghouta region on the outskirts of the capital Damascus, on Dec. 3, 2017. (AFP Photo)
by Associated Press Dec 10, 2017 12:00 am

The United Nations children's agency said Sunday 137 children stranded in a rebel-held suburb near the Syrian capital require immediate evacuation amid a crippling siege in which five have reportedly died from a lack of medical care.

The Eastern Ghouta suburb, home to 400,000 residents, has been besieged since 2013 and humanitarian conditions there have deteriorated sharply amid violence that intensified since Nov. 14. The Syrian Observatory for Human Rights says at least 202 people, including 47 children, have been killed since.

The area, the last remaining rebel-held pocket near the capital Damascus, is technically part of a "de-escalation zone" brokered by Russia earlier this year. Cease-fires brokered by Russia have largely held elsewhere in Syria but there has been little progress toward a political solution to the conflict that has claimed nearly 400,000 lives since it began in 2011.

Syrian opposition and government delegates are currently in Geneva for a new round of U.N.-sponsored talks after a short break. The government delegation has protested the opposition's insistence on the absence of President Bashar Assad from any future transition period.

After a few days' absence, the government delegation returned to Geneva Sunday for talks which are due to resume Monday.

In its statement Sunday, UNICEF said its aid workers described seeing one of the worst health situations since the conflict began in 2011 during a rare international aid convoy to a neighborhood in the Eastern Ghouta district at the end of November.

"Children are still living through so much horror," said UNICEF Representative in Syria Fran Equiza. "The situation is getting worse day by day. The health system is crumbling and schools have now been closed for almost a month. Sick children desperately need medical evacuation, and many thousands more are being denied the chance of a normal, peaceful childhood."

UNICEF says that nearly 12 per cent of children under 5 years-old in Eastern Ghouta suffer from acute malnutrition — the highest rate ever recorded since the start of the conflict in Syria.