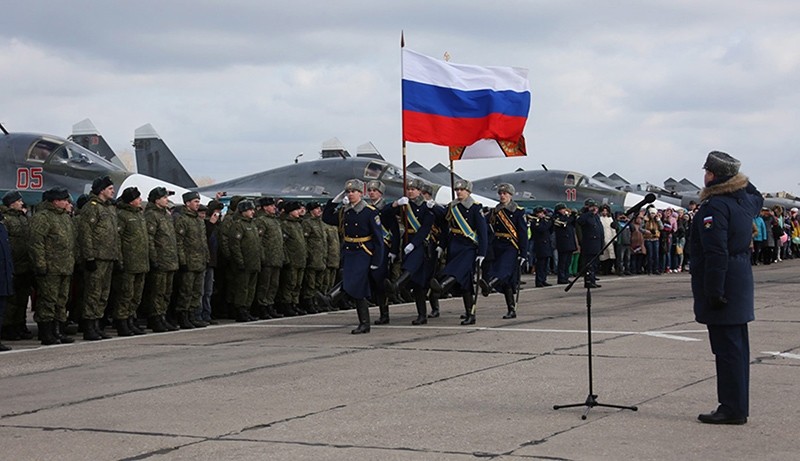 A handout picture made available by the Russian Defense Ministry shows a ceremony of meeting of the first group of Russian aircraft and military personnel upon return from Syria in Voronezh region, Russia, March 15, 2016. (EPA Photo)
by Daily Sabah with Agencies Dec 11, 2017 12:00 am

President Vladimir Putin ordered withdrawal of Russian troops from Syria during his surprise visit to the Russian air base in the war-torn country Monday.

Addressing Russian military servicemen at the Hemeimeem base in Syria's coastal province of Latakia, the heartland of Assad's Alawite minority, Putin said: "The task of fighting armed bandits here in Syria, a task that it was essential to solve with the help of extensive use of armed force, has for the most part, been solved and solved spectacularly."

"I congratulate you!" Putin told Russian servicemen after his meeting with regime leader Bashar Assad.

He was also quoted as saying that Russia would keep the Hemeimeem air base as well as a naval facility at the Syrian port of Tartous.

"In just over two years, the Russian Armed Forces, together with the [Assad regime] army, defeated the most capable group of international terrorists. Thereby, I made a decision — a significant part of the Russian military contingent, based in the Syrian Arab Republic, is returning home, to Russia," Putin said.

Russia launched its air campaign in Syria at the end of September 2015, when Assad's regime was teetering on the brink of collapse, and quickly changed the course of the conflict in his favor. Russian officials say troops in Syria were there mainly to fight "terrorists" including militants of the Daesh group and al-Qaida affiliates, but they also heavily targeted several opposition factions opposed to Assad, allowing his troops to claw back significant territory over the past two years. Putin has hosted Assad twice in the past six years, including a surprise Nov. 21 visit that Assad undertook to the Black Sea resort of Sochi.

During his Syria visit, President Putin told Assad he wanted to work with Iran and Turkey to kick-start the Syrian peace process, Russian news agencies reported, according to Reuters. Putin was also cited as telling Assad he hoped that it would be possible to launch the work of the Syrian Congress on National Dialogue while discussing the matter with Turkish President Recep Tayyip Erdoğan.

While en route to Turkey, Putin flew to Cairo for talks with his Egyptian counterpart on the two countries' rapidly expanding ties and regional issues, making his second visit to Egypt since 2015, according to Russia's Tass news agency, as reported by the Associated Press (AP).

Egypt has increased cooperation with Russia under Egypt's Abdel-Fattah al-Sisi as the two are also in the late stages of negotiations over the construction by a Russian company of Egypt's first nuclear energy reactor.

Last month, Russia approved a draft agreement with Egypt to allow Russian warplanes to use Egyptian military bases, a significant leap in bilateral ties and evidence of Moscow's expanding military role in a turbulent Middle East. Egypt, however, has not been able thus far to persuade Russia to resume its flights to Egypt, suspended since October 2015 when a suspected bomb brought down a Russian airliner over Egypt's Sinai Peninsula, killing all 224 people on board.

The visit marks Putin's first trip to Syria and comes as the Assad regime has retaken control over most of Syria under the Russian air cover.