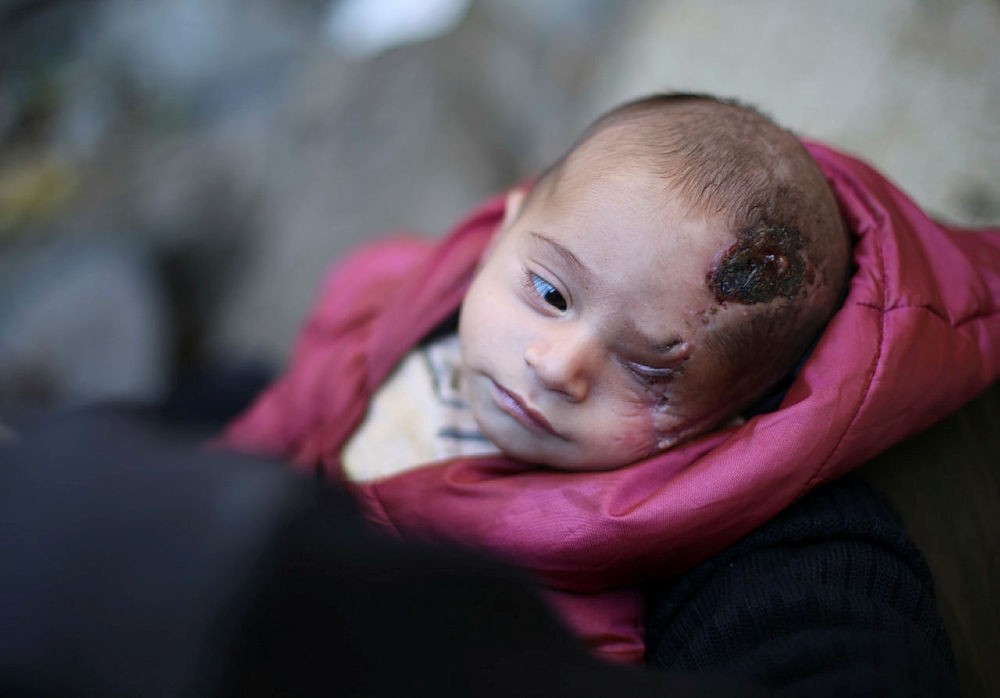 Karim lost his eye and suffered a severe skull fracture in a market bombing in Eastern Ghouta. (AA Photo)
by Associated Press Dec 20, 2017 12:00 am

Activists have launched a campaign in support of a Syrian infant who lost an eye and had his skull crushed in two separate Assad regime attacks on his besieged hometown near Damascus.

Karim was first wounded in late October when artillery shells struck a market in Hammouria, in opposition-held eastern Ghouta, killing his mother. The same attack killed a pregnant woman and her unborn child, and a third woman.

Ten days later, after the weeks-old baby was discharged from a hospital, shrapnel tore through the roof of his house. A volunteer rescuer, who goes by the name Abu Loay, said Karim was unconscious when he picked him up. As he rushed to the hospital, which is only a few hundred meters (yards) away, another shell hit, blocking their way. Abu Loay then drove Karim to another hospital.

In a series of images posted on social media, residents of eastern Ghouta and sympathizers posted picture of themselves covering one eye, in tribute to the now three-month-old infant.

"#BabyKarim I see you" and "#EasternGhouta siege must end," became Twitter trends on Monday.

Dear friends , I stand with 2 months old baby Karim who lost his eye & mother in Syria . What is the crime of a baby? Please #StandWithKarim pic.twitter.com/IIWhSVRrIN

The Solidarity with Karim campaign is the latest effort to bring attention to the Syrian regime siege, which dates back to 2012, when residents rose up against Bashar Assad during the country's Arab Spring uprising.

The conditions in eastern Ghouta, home to some 400,000 people, have rapidly deteriorated in recent weeks as the regime has tightened the siege, causing severe shortages of food, medicine and fuel as winter sets in.

The U.N. children's agency said last week that 137 children require immediate evacuation, saying five have already died because of the lack of medical care. The regime has refused to allow the U.N. to transfer nearly 500 people requiring medical evacuation to hospitals minutes away.

"Infants - some of them just one or two months old - will die if evacuation permits are not granted immediately," U.N. humanitarian chief Mark Lowcock told the Security Council on Tuesday. He said 16 people waiting for permission to leave have died, including a 45-day-old infant, a nine-year old girl and a quadriplegic.

"All that is needed is the green light from the Syrian authorities for these people to go to hospitals just a few miles outside of eastern Ghouta," he added.

The U.N. says roughly one in eight children in the area is malnourished, and that the U.N. and aid groups can only reach around 7 percent of those who are besieged.

The International Committee of the Red Cross meanwhile said it was alarmed by intensifying fighting in eastern Ghouta. Insurgents in eastern Ghouta launch mortar and rocket attacks on the capital, while the Assad regime has carried out waves of airstrikes. The Red Cross said the area is now grappling with "a frightening food shortage and a huge increase in food prices."

"The regime is starving its population to kill off the opposition," Delattre said. "It's a serious violation of international law and also a huge moral sin, and everyone who has an influence on the Syrian regime should pressure it to put an end to this situation, which is totally unacceptable."

Qussai Nour, a local journalist who visited Karim Monday, said the baby's unemployed father is struggling to care for him while raising his other children.

"Doctors in Ghouta are taking care of Karim, but he needs specialists in neurology, ophthalmology and cosmetic surgery," Nour said. "The situation at their home is quite miserable."

A medical report following the first attack said Karim, who was 40 days old at the time, suffered from loss of skull bone and severe tissue tearing that affected the eye socket, threatening to leave a permanent scare. The report, shared with The Associated Press by a medic, said specialized care is needed but is not available in eastern Ghouta.

"Karim is one of hundreds of cases in eastern Ghouta. If shelling against civilians doesn't stop, there are going to be a hundred or a thousand like Karim," said Moayed al-Halafi, a member of the Syrian Civil Defense, volunteer first-responders known as White Helmets.