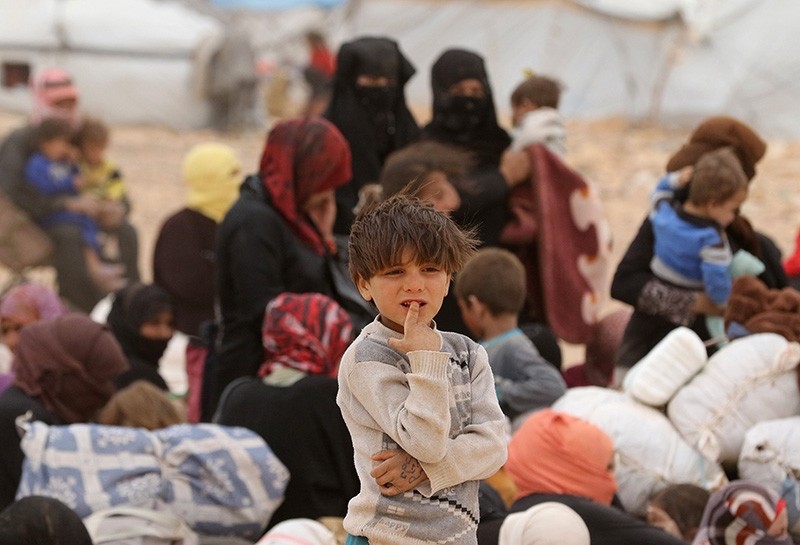 Syrian refugees wait to cross to the Jordanian side of the Hadalat border crossing, a military zone east of the capital Amman, after arriving from Syria on May 4, 2016. (AFP Photo)
by Daily Sabah with Wires Jan 07, 2018 12:00 am

Jordan says it will permit a one-time crane drop of U.N. aid to tens of thousands of displaced Syrians stranded in harsh conditions on its border.

The kingdom sealed its border with Syria in 2016, after Daesh militants killed seven Jordanian border guards. The closure ended regular U.N. aid shipments from Jordan to displaced Syrians struggling for survival in a remote stretch of desert.

According to U.N. estimates based on satellite images, between 45,000 and 50,000 Syrians have been stuck for months on the Syrian side of the frontier near the Rukban border crossing. Conditions are worsening for them as winter grips the region.

Jordan alleges that the Rukban border camp has been infiltrated by Daesh and that cross-border traffic endangers the kingdom. It insists that the U.N. deliver aid from war-ravaged Syria.

Jordan's Foreign Ministry said Sunday it would permit a one-time crane drop from its soil after the U.N. submitted a plan for aid delivery from Syria.

In October, Jordanian Foreign Minister Ayman Safadi had insisted that aid to those stranded near Rukban should come from Syria itself after the U.N. said deliveries were difficult to make because of the war.

The U.N. refugee agency says it has registered more than 650,000 Syrian refugees in Jordan since the conflict in Syria began in March 2011 with anti-government protests.

However, Amman says it is hosting 1.3 million Syrian refugees, counting those who have not registered with the U.N., and has repeatedly called for more assistance to do so.