Russia responsible for Assad regime chemical weapons use, US says 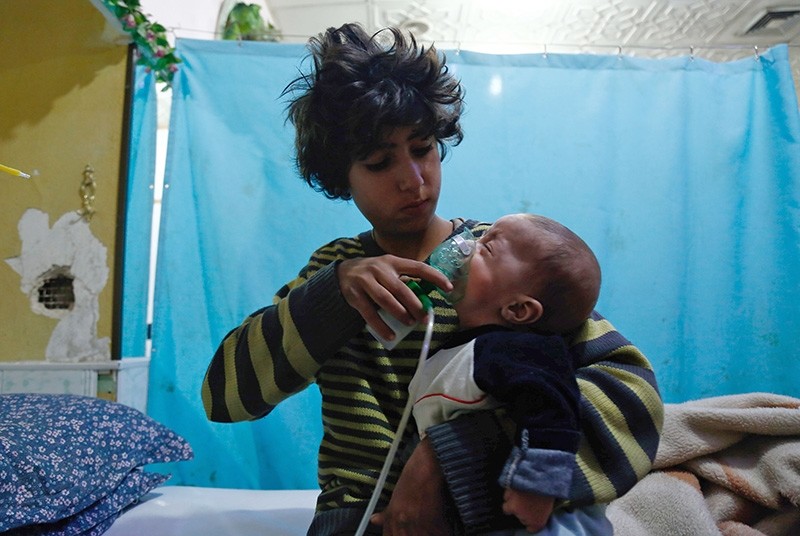 A Syrian boy holds an oxygen mask over the face of an infant at a make-shift hospital following a reported gas attack on Douma in the eastern Ghouta region near capital Damascus on January 22, 2018. (AFP Photo)
by Compiled from Wire Services
Jan 23, 2018 12:00 am

The Assad regime may still be using chemical weapons after a suspected chlorine attack in the rebel enclave of eastern Ghouta, the United States said on Tuesday, adding that Russia ultimately bore responsibility.

"Only yesterday more than 20 civilians, mostly children, were victims of an apparent chlorine gas attack," U.S. Secretary of State Rex Tillerson said after a conference on chemical weapons in Paris. "The recent attacks in East Ghouta raise serious concerns that Bashar al-Assad may be continuing to use chemical weapons against hiss own people."

Tillerson added that whoever conducted the attacks, "Russia ultimately bears responsibility for the victims in eastern Ghouta and countless other Syrians targeted with chemical weapons since Russia became involved in Syria".

The United States and 28 other countries are launching a new plan to better identify and punish anyone who uses chemical weapons, amid new reports of a suspected chemical attack in Syria.

The initiative was announced Tuesday in Paris, where Tillerson met with French Foreign Minister Jean-Yves Le Drian and diplomats from the other signatory countries.

The group plans to publish information about chemical attacks to name and shame perpetrators and eventually sanction them. U.N. efforts to punish perpetrators in Syria have failed, repeatedly blocked by Assad ally Russia.