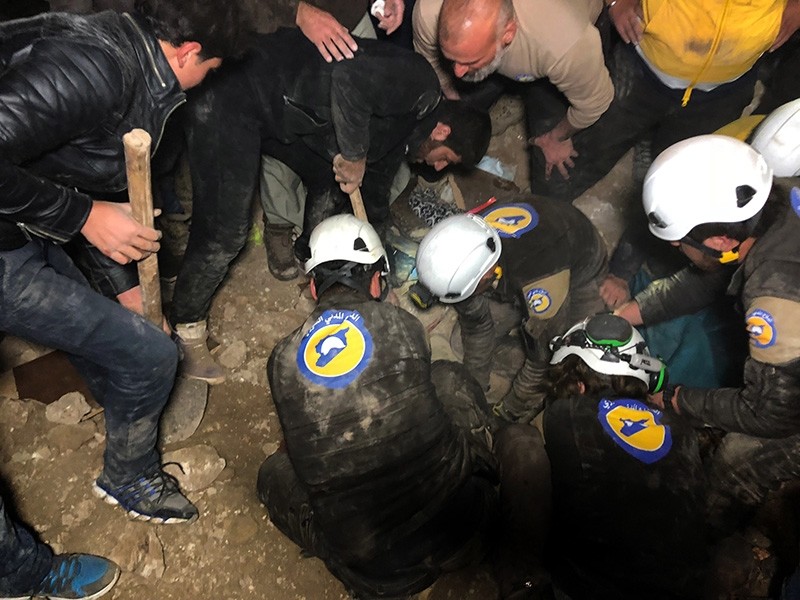 After a fresh chlorine gas attack in Syria’s Idlib province that killed at least eight civilians, the Syrian opposition urges the U.N. to take action to end Russian and Syrian regime attacks

Civilians have suffered chlorine gas poisoning during an attack on the opposition-held town of Saraqib in Idlib province that resulted in the death of at least eight people. The White Helmets, also known as the Syria Civil Defense, said at least 40 others were injured Sunday when a chlorine gas attack by Bashar Assad's regime targeted a residential area. Five people were treated for "suffocation" on Sunday after Syrian regime airstrikes on the northwestern town of Saraqeb, a monitor said, as reported by AFP.

The National Coalition of Syrian Opposition and Revolutionary Forces called on the United Nations Security Council (UNSC) to take emergency action to end the Russian and Syrian regime attacks on the northwestern city of Idlib.

The call from the Syrian National Coalition followed the recent attacks on several points of opposition-held Idlib, demanded the UNSC to urgently interfere and make decisions directly against Russia.

"It is expected that the international community will work at all levels to condemn the attacks as well as to save civilians in Idlib, Ghouta and all across Syria and to stop the attacks," the statement read, according to Anadolu Agency (AA). It is also noted that the Assad regime attacked civilians in the Saraqib district of Idlib with chlorine gas, labeling it a "repeated violation" of U.N. resolutions.

Russian jets intensified their raids on opposition-held towns and cities in Syria's northern Idlib province on Sunday night, a day after opposition groups shot down a Russian warplane and killed its pilot. Civil defense sources said air raids struck the towns of Kafr Nubl and Maasran, as well as the cities of Saraqib, Maarat al Numan and Idlib, and that several deaths and dozens of injuries were reported as rescuers dug through the rubble.

Aerial bombardment and fears of revenge by advancing Syrian troops and Iranian-backed militias have led to an exodus of tens of thousands of civilians further north to the safety of makeshift camps on the Syrian side of the Turkish border.

Syrians have poured into Idlib at an accelerating rate over the last two years, forced to abandon their homes in other parts of Syria that the regime and its foreign military allies have recaptured from opposition.

In December, the Syrian regime alongside Iranian-backed militias and heavy Russian airpower launched a major offensive to take territory in Idlib province, the last and most-densely populated province still mainly under opposition control. Located in northern Syria near the Turkish border, the Idlib province was declared a "de-escalation zone." Controlled by anti-regime armed groups, the province has been under intense airstrikes for the last two months. In January alone, 211 civilians were killed and 1,447 wounded.

The latest developments come as the United States this week accused the Syrian regime of using chemical weapons on opposition forces near capital Damascus. The Syrian regime denied the accusations as "lies." U.S. Defense Secretary Jim Mattis told reporters on Friday that his government is concerned sarin gas may have been recently used in Syria, citing reports from nongovernmental organizations and opposition groups. These reports said toxic gas has been used. Mattis however said the United States has no proof to support these accusations.

Syria has been locked in a devastating civil war since March 2011, when the Assad regime cracked down on pro-democracy protests with unexpected ferocity. While U.N. officials say hundreds of thousands of people have been killed in the conflict, Syrian regime officials say the death toll is closer to 10,000.