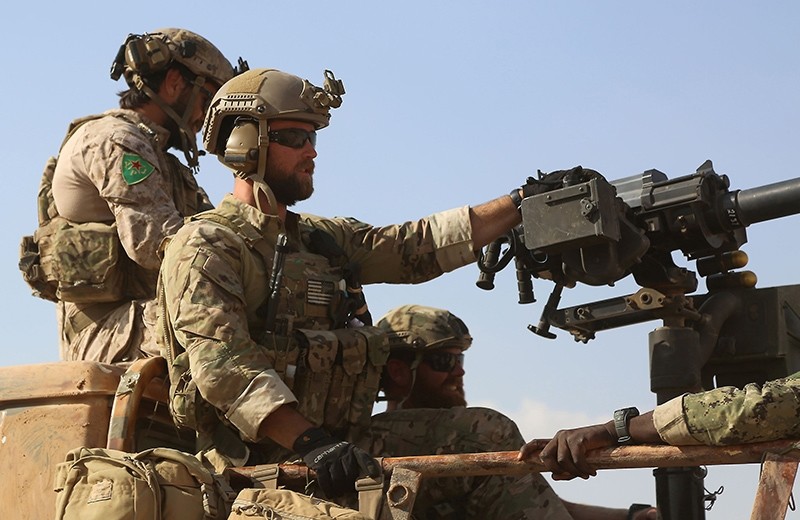 The U.S. military launched airstrikes on troops backed by the regime of Bashar al-Assad on Wednesday after as many as 500 attackers began what a U.S. military official said appeared to be a coordinated assault on the Syrian Democratic Forces (SDF) accompanied by U.S. advisers in Syrian province of Deir el-Zour.

The official said the strikes were in self-defense after the pro-regime forces began firing artillery and tank rounds at the U.S.-backed SDF, which is dominated by the PKK terror group's Syrian offshoot the Democratic Union Party (PYD) and its armed wing the People's Protection Units (YPG). About 100 of the attackers were killed, the official said.

It was a rare U.S. strike against forces that support the Assad regime.

The official said the pro-regime troops were in a large formation supported by artillery, tanks, multiple-launch rocket systems and mortars, and that 20 to 30 artillery and tank rounds landed within some 550 yards (500 meters) of the SDF headquarters.

Several U.S. officials said no Americans were injured or killed in the attack by the pro-regime forces, but one SDF member was wounded. All officials spoke on condition of anonymity to discuss preliminary details of the attack.

In response to the attack, officials said the terrorist YPG-led SDF supported by the coalition targeted the pro-regime troops with a combination of airstrikes and artillery rounds. Any of the attacking vehicles and personnel who turned around and headed back west were not targeted, the military official said.

Neither U.S. officials nor the U.S.-backed coalition have offered details on the attacking forces. Assad is supported by Iranian-backed militias and Russian forces.

The U.S.-led coalition had alerted Russian officials about the presence of SDF forces in the area far in advance of the thwarted attack, the U.S. official said.

"Coalition officials were in regular communication with Russian counterparts before, during and after the thwarted (enemy) attack," the official said.

The SDF, aided by coalition support, were used to fight Daesh terror group east of the Euphrates River. Assad regime forces are active on the other side of the river around the city of Deir el-Zour.

Officials said it appeared that the pro-regime forces were trying to take back land that the SDF had liberated from Daesh last September, including oil fields in Khusham.