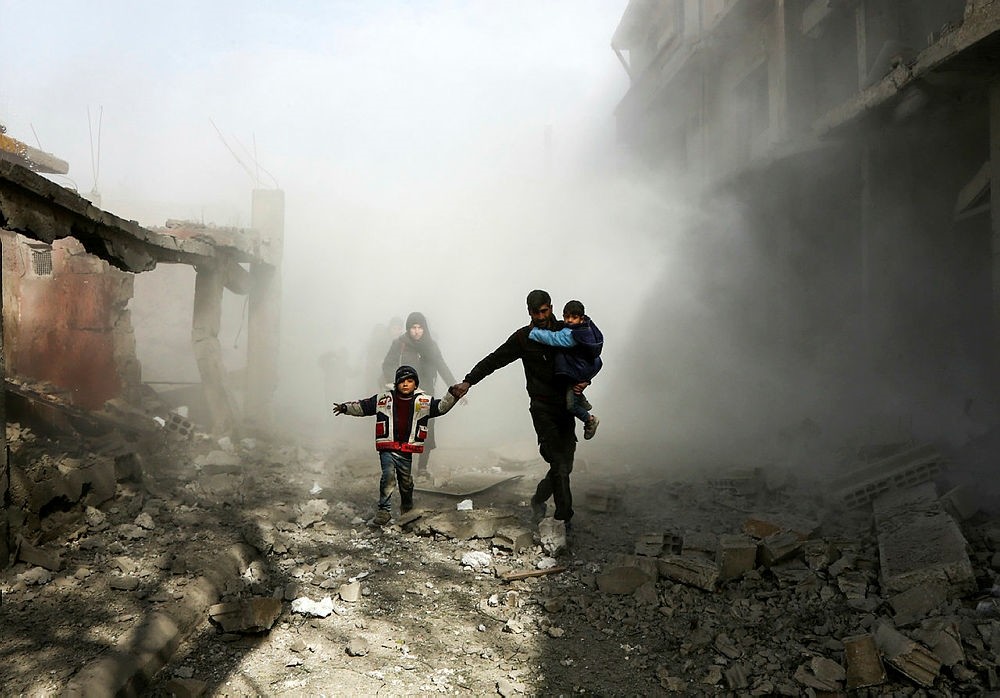 Syrian civilians flee from reported regime airstrikes in the besieged Eastern Ghouta region on the outskirts of the capital Damascus, Feb. 8.
by Compiled from Wire Services Feb 09, 2018 12:00 am

The district of Eastern Ghouta is suffering some of its worst bloodshed in years as heavy Syrian regime bombings have killed at least 35 civilians, including women and children

Syrian rescue workers and activists say at least 35 civilians, including a medic and children, have been killed in relentless regime strikes in the opposition-held region near the capital Damascus.

The civilian toll was first reported at nine yesterday morning, but almost immediately began to rise, mirroring previous bloody days in the besieged district. The Syrian Civil Defense, known as White Helmets, has recorded at least 35 civilians killed yesterday in at least six towns in the eastern Ghouta area in a combination of artillery and airstrikes, according to AP. It said the dead includes a medic and at least three children and eight women.

Wednesday's strikes hit at least six different locations in eastern Ghouta, said Britain-based Syrian Observatory for Human Rights head Rami Abdel Rahman. The highest toll was in the town of Jisreen where eight civilians were killed. An AFP correspondent there said the strikes hit near a school, a market and a mosque. Vegetable stalls in the market were overturned and damaged, and a motionless body lay outside the mosque. Rescue teams rushed to the district and pulled three children and a woman out of the rubble.

Moayad al-Hafi, a rescue worker, said his team was hit in a double-tap strike as they were pulling bodies out in Jisreen. "As we were pulling out the children and the dead from under the rubble, they targeted us with five rockets, directly targeting us," said Hafi, 24.

Another two children and a woman were killed in the town of Saqba, where streets were littered with human remains and destroyed cars.

A man carrying his young daughter screamed for an ambulance to take her to the nearest makeshift clinic.

An estimated 400,000 people in the besieged area live under a suffocating regime-imposed siege, which has made food and medicine nearly impossible to access.

Syrian regime warplanes have ratcheted up their bombardment of eastern Ghouta this week, leaving dozens dead and hundreds in need of medical care. Regime bombing raids left 38 civilians dead on Wednesday, the Observatory said in a new toll.

It came on the heels of the bloodiest day in months for eastern Ghouta on Tuesday when 80 civilians were killed in strikes.

Eastern Ghouta is the last major opposition stronghold on the capital's doorstep. The region has been under intense attack since the end of December as Bashar Assad struggles to bring it under control.

Most other opposition-controlled territory surrounding Damascus has been recaptured by regime forces either through military operations or local truce agreements. Eastern Ghouta is ostensibly included in a "de-escalation" deal that is meant to tamp down violence in a handful of areas across the country, but the bloodshed has escalated dramatically this week.

Syria has been locked in a devastating civil war since March 2011, when the Assad regime cracked down on pro-democracy protests with unexpected ferocity. While U.N. officials say hundreds of thousands of people have been killed in the conflict, Syrian regime officials say the death toll is closer to 10,000.