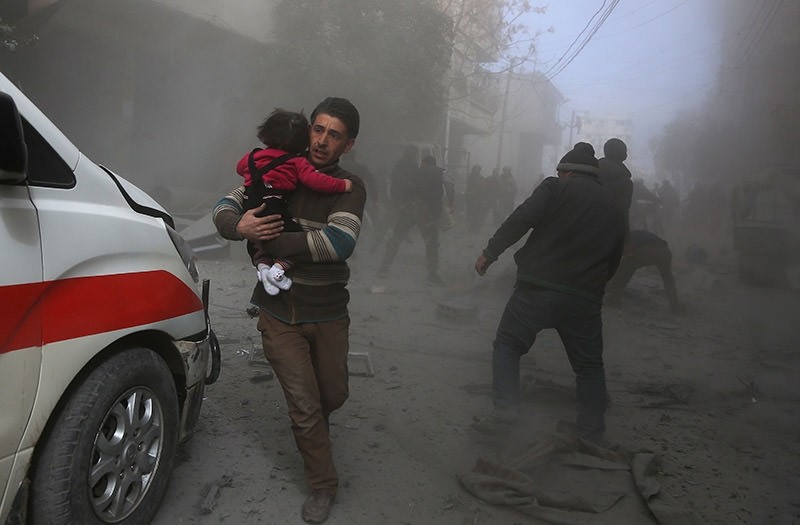 Syrian civilians flee from reported regime air strikes in the rebel-held town of Saqba, in the besieged Eastern Ghouta region on the outskirts of the capital Damascus, on February 8, 2018. (AFP Photo)
by Compiled from Wire Services Feb 09, 2018 12:00 am

The Syrian opposition-held area Eastern Ghouta of Damascus has suffered its bloodiest week since 2015 as a result of government bombardment, with 229 people killed in the last four days, the Syrian Observatory for Human Rights said on Friday.

"During the past four days 229 people were killed in Eastern Ghouta villages, including 58 children and 43 women," Rami Abdulrahman, the head of the Britain-based war monitor, told Reuters.

"These are the worst four days that Eastern Ghouta has ever gone through," said Hamza, an overwhelmed doctor at the Erbin clinic who was treating wounded patients.

"From 2011 until now, there has never been the level of bombardment we've seen in the last 96 hours."

"Children and teachers are terrified that at any moment they could be hit. The siege means there is nowhere for them to escape," said Sonia Khush, Save the Children's Syria response director.

"There must be an immediate halt to the fighting and an end to the siege."

Moayad al-Hafi, a rescue worker, said his team was targeted as they retrieved bodies near Erbin.

"As we were pulling out the children and the dead from under the rubble, they targeted us with five rockets -- directly targeting us," said Hafi, 24.

AFP correspondents said mortars were raining down on Bab Touma on Thursday night.

Eastern Ghouta was one of several so-called de-escalation zones agreed last year by three of the main outside players in the conflict -- Turkey, Iran and Russia.

Ankara announced Thursday it would host a new three-way summit to revive efforts to end the war, which has killed at least 340,000 people and displaced millions since 2011.

Recent attempts to bring the conflict's protagonists and brokers to the table have floundered, but the U.N. made a fresh call this week for conflicting sides to halt fighting.

The United States backed the plea but Russia -- a longtime ally of the Assad regime -- shrugged it off.

"That is not realistic," Russian Ambassador Vassily Nebenzia told reporters at the U.N.