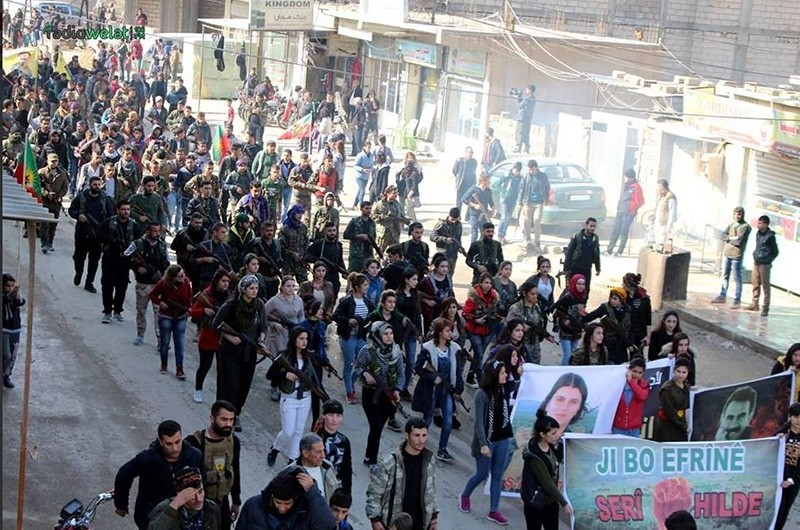 This file photo shows a ,solidarity march, in Syria, in which participants in civilian clothing carry rifles, banners of PKK/PYD/YPG and its jailed leader Abdullah u00d6calan. Some 500 terrorists are estimated to cross into Afrin through such convoys.
by Daily Sabah with Reuters Feb 12, 2018 12:00 am

Pro-regime and SDF forces have fought each other elsewhere in Syria, while Damascus has long opposed Kurdish demands for autonomy, even denying granting them citizenship.

The Democratic Unity Party (PYD) in Syria, just like its main organization the PKK, claims that it represents Kurds as well as other ethnic groups over an ideology dubbed as the "democratic confederalism." However, the group, through its armed wing YPG, pressures political opponents and changes demographics in the region as it forces local Arabs and Turkmens to flee.

But in Afrin, both groups have a common enemy and a mutual interest in blocking Turkish advances.

Syria and Turkey have a number of historical problems in their bilateral relations. The Syrian ruling elite, whether monarchist or Baathist, has never accepted Turkey's annexation of southern Hatay (Antioch) province from French-mandate Syria. The two countries are also at odds over water rights on the Euphrates River. While Turkey was a NATO member throughout the Cold War, Syria shifted to the Soviet axis, faced with an increasing Israeli threat after 1956.

Despite its abuses against its own Kurds, the Baath regime started backing the PKK shortly after its formation to contribute to the balance of power with its stronger northern neighbor. PKK founder and leader Abdullah Öcalan, before his capture in 1999, ran the terrorist group from Damascus between 1979 and 1998, until finally Turkey threatened Syria with war. The terrorist group freely operated safe houses and camps throughout Syria, as well as in the Syrian-occupied Beqaa Valley.

It wasn't until the early 2000s and a thaw in relations with Turkey that the Baath regime completely forced the PKK out of the country, which moved to northern Iraq from then on. The regime even crushed a PYD-linked riot in the city of Qamishli in 2004, killing dozens.

However, with the outbreak of the civil war in 2011, the regime handed over much of the border region to PYD and its armed wing YPG.

Turkey, which regards the YPG in Afrin as a threat on its southern border, launched Operation Olive Branch on the region last month. Seeking to shield Afrin, the YPG asked Damascus to send forces into action to defend the border.

The regime shows no sign of doing so, but is providing indirect help by allowing YPG fighters, civilians and politicians to reach Afrin through territory it holds, representatives of both sides told Reuters.

Assad stands to gain while doing little. The arrival of reinforcements is likely to sustain YPG resistance, bog down the Turkish forces and prolong a conflict that is sapping the resources of military powers that rival him for control of Syrian territory.

Lacking international protection, YPG forces in northern Syria say they have reached agreements with Damascus to allow reinforcements to be sent to Afrin from other Kurdish-dominated areas, Kobani and the Jazeera region, both handed over to the PYD by the Assad regime in 2012 after the outbreak of the civil war.

While the YPG depends on Assad to reach Afrin, PYD sources say they also enjoy leverage over Damascus because it needs their cooperation to source grain and oil from areas of the northeast under PYD control.

A commander in the military alliance fighting in support of Assad said "the Kurds have no option but coordination with the regime" to defend Afrin.

"The Syrian regime is helping the Kurds with humanitarian support and some logistics, like turning a blind eye and allowing Kurdish support to reach some fronts," said the commander, who spoke on condition of anonymity.

For the United States, it is yet another complication in Syria's 7-year-old war, and a reminder of how its ally YPG must at times make deals with Assad even as it builds military ties with the United States.

For much of the war, Damascus and the YPG have avoided confrontation, at times fighting common enemies, including the opposition groups that are now helping Turkish troops in Afrin.

But tensions have mounted in recent months, with Damascus threatening to march into parts of eastern and northern Syria captured by the SDF with support from the U.S.-led coalition.

Underlining that, pro-Syrian government forces attacked the SDF in the eastern province of Deir al-Zor, drawing coalition air strikes overnight that killed more than 100 of the attackers, the coalition said.

"The regime has allowed the YPG to bring people into Afrin, while attacking it east of the Euphrates [River]. I think that is indicative of the state of relations right now," said Noah Bonsey, International Crisis Group's Senior Analyst on Syria.

He added: "There is still a significant gap between the YPG and regime positions on the future of northeastern Syria."

The main Syrian Kurdish groups, now represented only by the PYD and other PKK-affiliated groups after alternative groups were expelled by the terrorists, remain wedded to their vision of a Syria where they enjoy autonomy in a form of federalism that is at odds with Assad's determination to recover all Syria.

Each side has allowed the other to maintain footholds in its territory. In YPG-held Qamishli, the regime still controls the airport. In the Sheikh Maqsoud district of Aleppo, a regime-held city since 2016, YPG forces patrol the streets.

Scores of Kurds from Sheikh Maqsoud have gone to Afrin to support the fight, PYD officials there said. The short journey requires movement through areas held by the regime or its Iran-backed Shiite militia allies.

"Around 10 of them were martyred (killed)," he told Reuters as YPG forces held a rally to commemorate one of the dead.

Earlier this week, witnesses say a civilian convoy of hundreds of cars drove to Afrin from other PYD-held areas in a show of solidarity. However, later reports from local, Turkish and international news outlets stated that hundreds of armed fighters were among the convoy.

Ankara views the YPG as an extension of the PKK, which has fought a three-decade insurgency in Turkey and is regarded as a terrorist group by the U.S. and the European Union.

The U.S. has backed the YPG on the claim that it is a vital ground component of its war against Daesh, and has supported the group in other regions in northern Syria along the border with Turkey.

But U.S. forces are not in Afrin, so have been unable to shield Afrin from the attack by Turkey, its NATO ally.

The YPG meanwhile accuses Russia of giving a green light for the Turkish attack by withdrawing observers it deployed in Afrin last year.

The YPG controls nearly all of Syria's frontier with Turkey. But Afrin is separated from the SDF-controlled region further east by a 100 kilometers-wide zone controlled by the Turkish military and the Free Syrian Army (FSA) fighters backed by Turkey.

Since the beginning of Operation Olive Branch, the Turkish military and FSA have captured 49 different strategic areas, including a town center, 32 villages, three rural areas and 13 hills, from the PKK-affiliated terrorist groups.