'Dozens' of Russian nationals hurt in US attack in eastern Syria: ministry 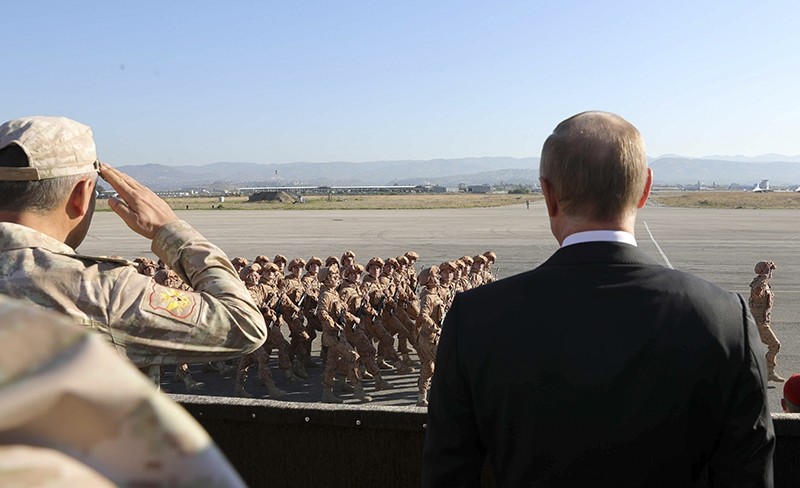 In this file photo taken on Tuesday, Dec. 12, 2017, Russian President Vladimir Putin, right, watches the troops marching as he and Syrian President Bashar Assad visit the Hemeimeem air base in Syria. (AFP Photo)
by Daily Sabah with AFP Feb 20, 2018 12:00 am

Moscow on Tuesday said dozens of Russian citizens were injured after a U.S. drone attack this month in eastern Syria, amid mounting reports of casualties among Russian nationals in the country.

The U.S. coalition on Feb. 7 struck a formation attacking a position of the terrorist PKK-linked Syrian Democratic Force (SDF) east of the Euphrates river in eastern Syria, killing about 100 people and destroying a Russian T-72 battle tank.

Many Russian nationals were reportedly killed in the strike, according to their relatives and paramilitary groups, as well as political organizations that published information about the casualties.

The Russian foreign ministry, which previously said that five Russian citizens were likely killed, on Tuesday released a statement that "there are also several dozens injured" in the attack.

It said "there are Russian citizens in Syria who went there with various goals" and "it is not up to the foreign ministry to evaluate the legality of their decisions."

The ministry said it had helped the injured Russians return home where they were "receiving medical care in various medical institutions."

It denied that the incident involved any Russian military.

The Russian government is reviewing a bill that would make private military companies legal, in order to clarify the currently murky status of mercenaries engaged in conflicts overseas.