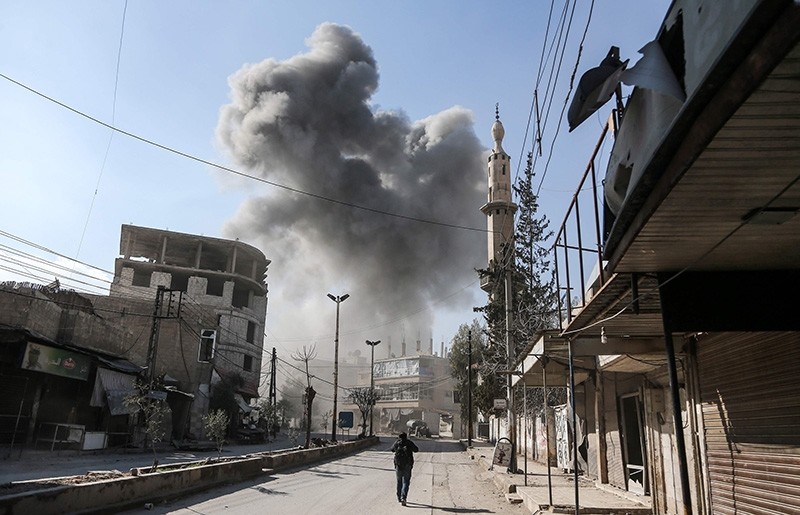 A picture taken on February 21, 2018 shows a smoke plume rising following a reported regime air strike in the opposition-held enclave of Hamouria in the Eastern Ghouta near Damascus. (AFP Photo)
by Compiled from Wire Services Feb 21, 2018 12:00 am

U.N. Secretary-General Antonio Guterres on Wednesday called for an immediate halt to fighting in Damascus suburb of Eastern Ghouta where a bombing campaign by the Assad regime has turned the opposition-held enclave into "hell on Earth" for civilians.

"My appeal to all those involved is for an immediate suspension of all war activities in Eastern Ghouta allowing for humanitarian aid to reach all those in need" and for medical evacuations, Guterres told the Security Council.

The U.N. chief said he was "deeply saddened by the terrible suffering" of civilians in Eastern Ghouta where he said 400,000 people "live in hell on Earth."

"This is a human tragedy that is unfolding in front of our eyes, and I don't think we can let things go on happening in this horrendous way," he added.

Guterres said he supported efforts at the Security Council to agree on a draft resolution demanding a 30-day ceasefire in Syria to allow for deliveries of humanitarian aid and medical evacuations.

Sweden and Kuwait presented the measure to the council on February 9 but negotiations have been tough-going, with Russia raising objections to the proposed truce, diplomats said.

"I fully support that effort, but I believe Eastern Ghouta cannot wait," Guterres told the council.

The negotiations have dragged on as regime forces backed by Russia have escalated a fierce offensive on Eastern Ghouta.

Close to 300 civilians have been killed since Sunday including 24 Syrians who died when regime warplanes dropped barrel bombs on the town of Kfar Batna on Wednesday, according to the Syrian Observatory for Human Rights.

U.N. human rights chief Zeid Ra'ad al-Hussein attacked what he called a "monstrous campaign of annihilation" on Wednesday against the besieged civilian population of Eastern Ghouta.

"International humanitarian law was developed precisely to stop this type of situation, where civilians are slaughtered in droves in order to fulfil political or military objectives," he said in a statement.

Swedish Ambassador Olof Skoog told reporters he hoped that a vote on the draft resolution demanding the ceasefire could take place "in the next few days," possibly as early as Thursday.

Asked whether there was a consensus on the draft text, Skoog said: "That, I don't know yet."

Russia has resorted to its veto power at the council to block resolutions targeting its ally.

The latest draft text circulated last week calls for the truce to go into effect 72 hours after the adoption of the measure and for aid deliveries and medical evacuations to begin 48 hours after that.

Also on Wednesday, Germany has accused Bashar Assad's regime of carrying out a massacre in Eastern Ghouta near Damascus, and called on the regime's backers Russia and Iran to use their influence to stop bombing of civilians.

Speaking at a news conference in Berlin, Chancellor Angela Merkel's spokesman condemned the recent airstrikes by the Assad regime.

"This is not fight against terrorism, this is a military campaign against the country's civilian population," spokesman Steffen Seibert said, adding that the regime was deliberately targeting civilian infrastructure and hospitals, and was blocking humanitarian access to the area, in order to force the armed opposition groups in the besieged district to surrender.

He called on the regime's backers Russia and Iran to use their influence to prevent further massacres in Eastern Ghouta.

"Where is Russia and where is Iran, which announced in Astana that they would also ensure cease-fire in Eastern Ghouta?" he asked.

"Without the support of these two allies, the Assad regime would not have the military strength it has now. And without this support, the regime would have demonstrated more willingness to negotiate a political solution within the U.N. process," he added.

Seibert said Germany demanded from the regime an immediate end to the "massacre" in Eastern Ghouta, and an unhindered humanitarian access to the district.

"We are also calling on the backers of the Assad regime to use their influence for this purpose," he added.

French President Emmanuel Macron on Wednesday also called for a truce in the area, accusing Bashar al-Assad's regime of using the fight against terrorism as a "pretext" to attack civilians.

"France is asking for a truce in Eastern Ghouta in order to ensure the evacuation of civilians and facilitate humanitarian access as quickly as possible," he told reporters.

Macron said that France was "fully committed" to fighting terrorism in Syria as part of the U.S.-led coalition.

"But France clearly, vigorously condemns what is happening today in Eastern Ghouta," he said, calling for an "immediate" U.N. resolution on the situation.

Eastern Ghouta, which has remained under a crippling regime siege for the last five years, falls within a network of de-escalation zones -- endorsed by Turkey, Russia and Iran -- in which acts of aggression are expressly prohibited.

Syria has been locked in a devastating civil war since March 2011 when the Assad regime cracked down on pro-democracy protests with unexpected ferocity.

While U.N. officials say hundreds of thousands of people have been killed in the conflict, Syrian regime officials say the death toll is closer to 10,000.