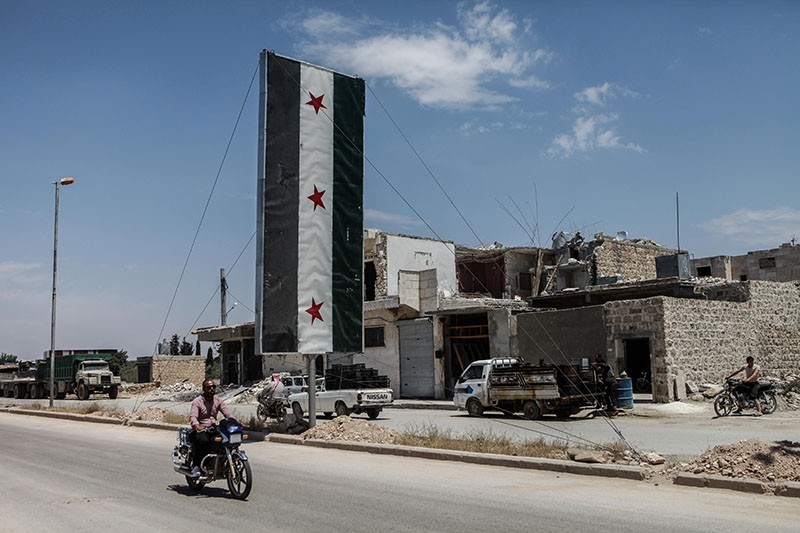 As the northern Syrian town of al-Bab marks the first anniversary of its liberation from Daesh terrorists, its population has jumped from 130,000 to 300,000, with its economy and services benefiting from the safe environment.

The town, an important crossroads and settlement in northeastern Aleppo province, was liberated from the four-year-long cruel Daesh rule on Feb. 22, 2017, by the Turkish Armed Forces (TSK) and Free Syrian Army (FSA) fighters as part of the Operation Euphrates Shield launched on Aug. 24, 2016, to clear the terrorist group from Turkey's border regions.

The town's infrastructure and public buildings, heavily damaged due to lack of maintenance, airstrikes targeting the Daesh terrorists and the final clashes before its liberation, have either been restored or completely rebuilt thanks to Turkey's efforts.

Mohammed El Faris, the manager of the law department of the local administration in al-Bab, told Ihlas News Agency that the city underwent a great development period since its liberation. "All the rubble in the city was removed. Houses were restored, schools, hospitals were repaired. New schools have been opened and 27,000 students have resumed their education. Health care services were improved, a new hospital has been inaugurated in the northern Asuri neighborhood. An industrial leap has commenced in the city and great development was recorded in the economy. Civilian organizations, including the teachers union, engineers union and a bar association union were established, fulfilling their societal duties. Although real estate records were lost, commercial entities' registries and land registries were carried out. A regular police organization and courts were established as part of the efforts to establish security," Faris explained.

Engineer Cemal Osman, the speaker of the local assembly of al-Bab, said everything went back to normal within a year after Daesh rule. "Al-Bab's infrastructure was completely destroyed and administrative buildings were demolished. Thank god, everything is normal today. Children are back in their schools, faithful are back in their mosques, government buildings start working again, police and the law system have been restored," Osman said.

Fevzi el-Saih, the manager of the education department, explained that nine schools have been opened for education thanks to assistance from Turkey, while 16 schools outside of the town started serving again. He added that many teachers are receiving training in this regard, and the schools provide additional courses to the public, supplemental to regular classes.

In addition to al-Bab, towns of Jarablous, al-Rai and Dabiq were also cleared from the terrorist group in Operation Euphrates Shield. Since then, more than 300,000 Syrian refugees in Turkey have returned to their homeland, in addition to thousands of others displaced inside Syria.