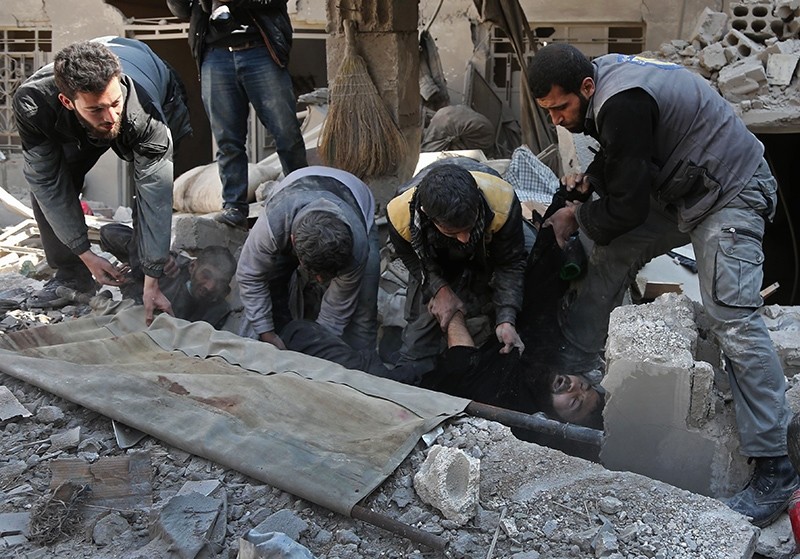 Members of a Syrian civil defense team rescue a man following an Assad regime airstrike on the opposition-held besieged enclave of eastern Ghouta on the outskirts of the capital Damascus in Hamouria, Syria, Feb. 21, 2018. (AFP Photo)
by French Press Agency - AFP Feb 21, 2018 12:00 am

The Kremlin on Wednesday denied involvement in airstrikes on Syria's opposition-held eastern Ghouta enclave that monitors say have killed at least 250 civilians since the start of the week.

"These are groundless accusations. It is not clear what they are based on. No specific data has been given. We do not agree [with them]," presidential spokesman Dmitry Peskov said in response to a U.S. briefing saying that Russia was responsible for the attacks.

The U.K.-based Syrian Observatory for Human Rights (SOHR) has also blamed Russian warplanes for the strikes.

Bombardment of the enclave on the outskirts of Damascus on Tuesday killed 106 civilians, including 19 children, the SOHR said.

It was the second straight day that the civilian death toll topped 100, after 127 were killed Monday in eastern Ghouta's bloodiest day in four years.

The strikes left an important hospital out of action, further limiting the little medical aid accessible to besieged civilians.

The opposition-held region is nominally included in a "de-escalation" deal meant to tamp down violence, but the Assad regime appears to be preparing troops for a ground assault to retake it.

The Russian military has fought a campaign for over two years in Syria, launched in September 2015 in support of Assad, helping to turn around the multi-front war.