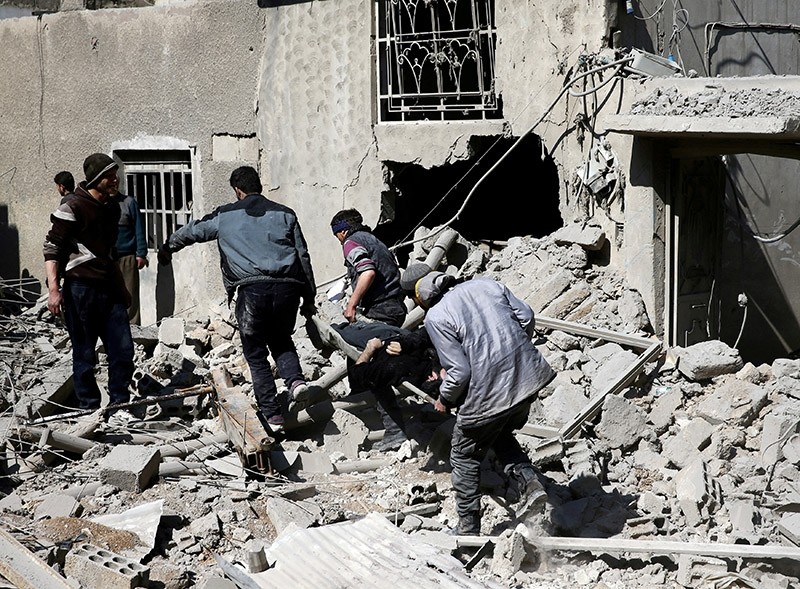 People carry the body of Majid Santiha on a stretcher in the besieged eastern Ghouta town of Hamouriyeh near Damascus, Syria, February 21, 2018. (Reuters Photo)
by French Press Agency - AFP Feb 22, 2018 12:00 am

Rockets fired by Assad regime forces killed at least 13 civilians in the besieged opposition-held enclave of eastern Ghouta near Damascus on Thursday, a monitor said.

The Syrian Observatory for Human Rights said at least 13 people were killed in Douma, the main town in eastern Ghouta, three of them children.

"It was raining on the area so there are no warplanes but it seems the regime chose to use rockets instead," Rami Abdel Rahman, the head of the Britain-based war monitor, said.

"The rocket fire hasn't stopped this morning. Around 200 ground-to-ground rockets struck Douma alone," he said, adding that the number of wounded across the enclave on Thursday topped 120.

The latest deaths brought to at least 335 the number of civilians killed since Sunday, when the regime intensified its bombardment of eastern Ghouta.

According to regime media and the Observatory, at least 15 people have been killed by mortar rounds and rockets fired in the other direction, by terrorist groups, over the same period.