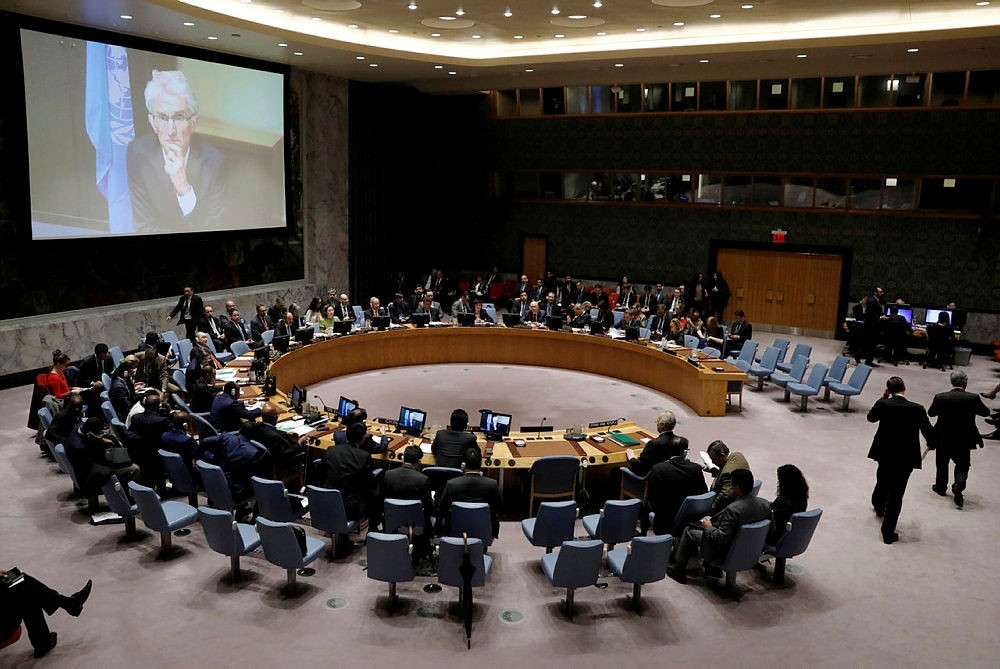 After two weeks of negotiations, Russia on Thursday told the UN Security Council that there was still no agreement on a 30-day ceasefire in Syria, dimming hopes of international action to halt the carnage in Eastern Ghouta.

During a council meeting called by Russia, Ambassador Vassily Nebenzia presented a new raft of amendments to a draft resolution that would allow deliveries of humanitarian aid and medical evacuations during the pause.

Negotiations on the draft presented by Sweden and Kuwait on February 9 have dragged on as hundreds of Syrians have died in a fierce government air campaign in the opposition-held enclave of Eastern Ghouta.

Nebenzia told the council that Sweden and Kuwait had requested a vote on the draft resolution even though they are "fully aware there is no agreement on it."

The Security Council needs to reach a "feasible" agreement on a ceasefire and not take a decision that would be "severed from reality," said Nebenzia.

UN diplomats resumed talks in a last-ditch bid to avoid a Russian veto and a vote at the council was now considered for Friday.

"We are trying to find a way forward," Swedish Ambassador Olof Skoog said after the meeting, adding that he was "leaning towards a vote" on Friday.

The United States, France and Britain called for a quick vote to address the acute crisis on the ground.

"The United States is ready to vote on this resolution right here and right now," said US diplomat Kelley Currie.

"The assault from the regime is relentless, and the suffering is overwhelming."

Outside UN headquarters in New York, a coalition of aid groups put up three billboards, inspired by the film "Three Billboards outside Ebbing, Missouri" that said "500,000 dead in Syria. And still no action? How come Security Council?"

More than 400 people have been killed in the five-day assault by the government on Eastern Ghouta, where UN Secretary-General Antonio Guterres said 400,000 Syrians are living in "hell on earth."

In his address to the council, Nebenzia cited concerns over enforcing the ceasefire and questioned the feasibility of quickly launching a major aid operation to reach civilians and lift sieges.

He accused supporters of the ceasefire of seeking to create "a scandal in order to step up pressure on the Syrian government and taint the Russian government."

The draft resolution would pave the way for the truce to go into effect 72 hours after the adoption of the measure and for aid deliveries and medical evacuations to begin 48 hours after that.

It demands the immediate lifting of all sieges including in Eastern Ghouta, Yarmouk, Foua and Kefraya and orders all sides to "cease depriving civilians of food and medicine indispensable to their survival."

In a concession to Russia, the draft was amended during tough-going negotiations last week to specify that the ceasefire does not apply to the Daesh or Al-Qaeda.

That would allow the Syrian government offensive to continue against Al-Qaeda-linked jihadists in Idlib, the last province in Syria outside the control of Damascus.

French Ambassador Francois Delattre warned that failure to act to help Eastern Ghouta would result in a devastating loss of credibility for the Security Council and could mean "the death knell of the United Nations."

More than 340,000 people have been killed and millions driven from the homes in the war, which next month enters its eighth year with no end in sight.

More than 13.1 million Syrians are in need of humanitarian aid, of whom 2.9 million live in besieged and hard-to-reach areas.