Pressure mounts on Assad to end massacre in eastern Ghouta 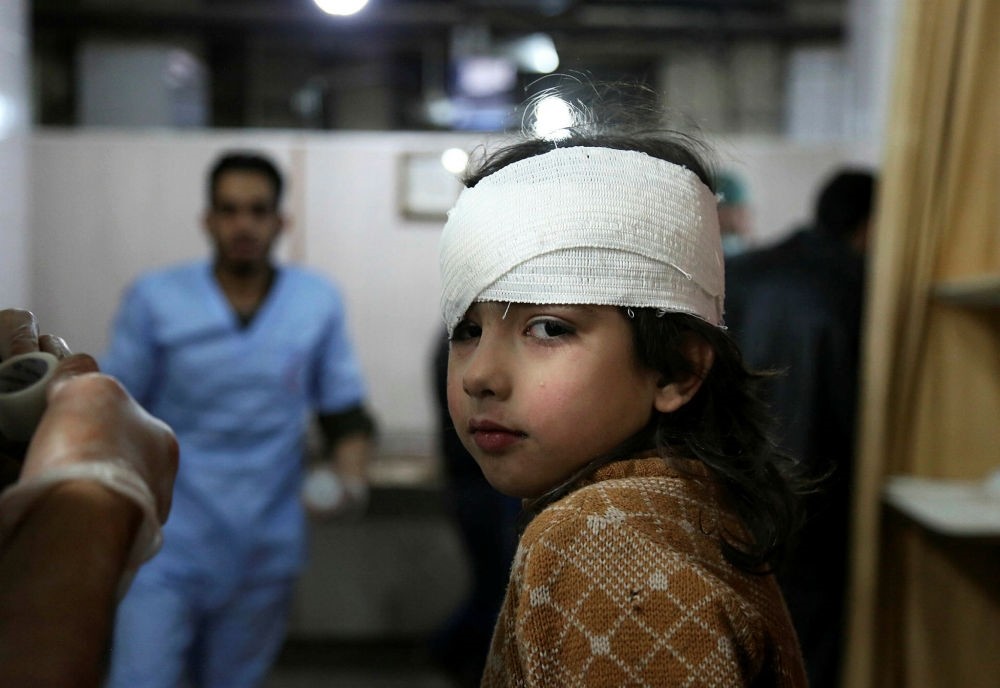 The Assad regime has continued to rain rockets and bombs on eastern Ghouta, killing another 19 civilians as international pressure mounts to stop the carnage in the besieged enclave

A new wave of deadly Syrian regime bombardment on Thursday in the opposition-held eastern suburbs of the capital Damascus killed 13 people. World leaders and aid groups called for an end to the carnage that has killed hundreds of people in recent days.

The airstrikes on besieged towns in the suburb known as eastern Ghouta were reported by several local opposition activist groups and a Britain-based war monitor.

The Syrian Civil Defense, also known as the White Helmets, which works in opposition-held areas said its paramedics rushed to several areas after the shelling. Bashar al-Assad's forces have been pounding the area for days, hitting residential buildings, hospitals and infrastructure and overwhelming medics and rescue workers.

Calls for a humanitarian truce in one of the bloodiest episodes of Syria's seven-year-old conflict went unheeded as the death toll for Damascus's five-day blitz rose to 368. Since Tuesday, regime forces have stepped up attacks on Eastern Ghouta using barrel bombs, artillery fire and other types of weapons, according to an Anadolu Agency correspondent based in the area.

Over a three-day period, the regime has reportedly carried out 260 separate attacks in Eastern Ghouta. Regime forces have struck 22 of the district's health centers.

According to Doctors Without Borders, 13 of the facilities it supports in Eastern Ghouta were damaged or destroyed in three days, leaving remaining staff with very little to save the hundreds of wounded that are brought to them every day.

On Wednesday night, they also targeted the Al-Nur Mosque in Eastern Ghouta's Douma city with barrel bombs. Regime attacks were reportedly still ongoing as of Thursday. Russia has rejected allegations it was responsible for the mounting civilian casualties in eastern Ghouta.

U.N. Secretary-General Antonio Guterres called for an immediate suspension of "all war activities" in the area where he said people are living "in hell on earth."

Forces loyal to Bashar al-Assad have been besieging almost 400,000 civilians trapped inside Eastern Ghouta for years, but the siege has tightened this year and attacks on the enclave have intensified. Siege tactics and indiscriminate attacks on civilian areas contravene the internationally-agreed "rules of war."

The besieged enclave, just east of the capital, is supposed to be one of four de-escalation zones declared last year in a bid to reduce the bloodshed.

The Assad regime, the source said, "must seriously pursue a political solution [to the conflict] based on agreed-upon principles laid out in the Geneva 1 Declaration and U.N. Security Council Resolution 2254." Adopted by the UNSC unanimously in late 2015, the resolution calls for a lasting ceasefire and a viable political settlement in war-torn Syria.

Syria has been locked in a devastating civil war since March 2011, when the regime cracked down on pro-democracy protests with unexpected ferocity.

While U.N. officials say hundreds of thousands of people have been killed in the conflict, the Syrian regime officials say the death toll is closer to 10,000. More than 13.1 million Syrians are in need of humanitarian aid, including 6.1 million who have been displaced within the country during the nearly seven-year war, according to the U.N.