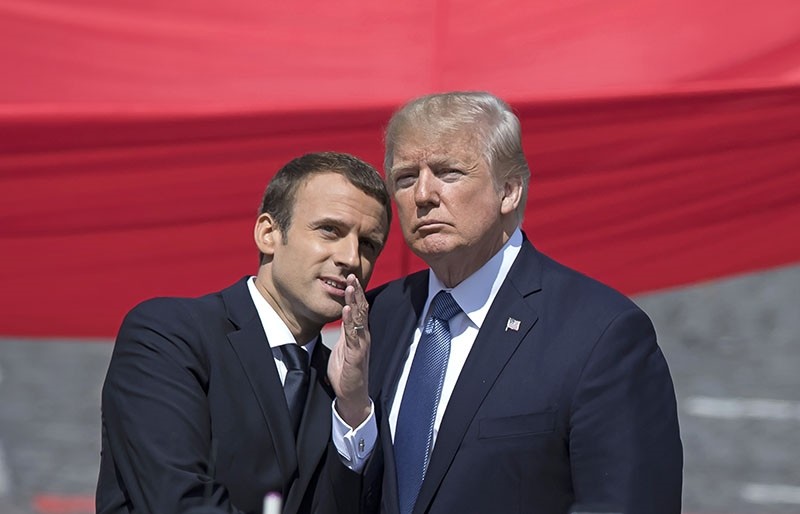 In a phone call, the French and U.S. presidents on Friday called for the "immediate" implementation of a cease-fire in Syria -- especially the besieged Eastern Ghouta enclave -- and said Russia must exert maximum pressure on the Syrian regime.

Emmanuel Macron and Donald Trump discussed the situation in Syria and last weekend's U.N. Security Council resolution calling for a 30-day cease-fire in Syria, according to a French presidential statement.

Macron and Trump agreed that "in the face of continuing indiscriminate shelling against civilians, particularly in Eastern Ghouta, and the continuing deterioration of the humanitarian situation," Russia must "exercise maximum, unambiguous pressure on the Damascus regime" to make clear its commitment to abide by the resolution.

"The presidents decided to work together for the implementation of Resolution 2401 to allow the cessation of hostilities, the delivery of humanitarian aid, and the evacuation of the sick and wounded," said the statement.

Macron also stressed he remained "extremely vigilant" on the question of chemical weapon use in Syria and said France would give "a firm response in case of a proven use of chemical weapons resulting in civilian deaths."

"France and the United States will not tolerate impunity," added the statement.

The rising pressure on Damascus and its key ally Moscow comes after new reports last weekend of suspected chlorine use in the battered opposition-held enclave of Eastern Ghouta.

France has repeatedly warned that evidence of the further use of chemical weapons in Syria is a "red line" that would prompt French strikes in a brutal seven-year conflict that has drawn in foreign powers from Russia to Turkey.

Washington has asked the U.N. Security Council to set up a new inquiry on chemical weapons attacks, for which the Syrian regime has repeatedly denied responsibility.

Eastern Ghouta, a Damascus suburb, has been under siege for the last five years, and humanitarian access to the area, which is home to some 400,000 people, has been completely cut off.

In the past eight months, Syrian regime forces have intensified their siege of Eastern Ghouta, making it nearly impossible for food or medicine to get into the district and leaving thousands of patients in need of treatment.

Some 700 people are believed to have been killed by Syrian regime assaults over the past 10 days.

A five-hour daily "pause" announced by Moscow on Monday has led to a reduction in the bombardment, but it falls far short of the U.N. ceasefire agreed through a Security Council resolution Saturday that has yet to be implemented.

The U.N. Human Rights Council is to hold an emergency meeting on Eastern Ghouta on Friday after dozens of aid trucks were unable to reach suffering civilians a day earlier.

Aid workers have warned of dire medical needs in the enclave and the urgent need to evacuate the many sick and wounded.