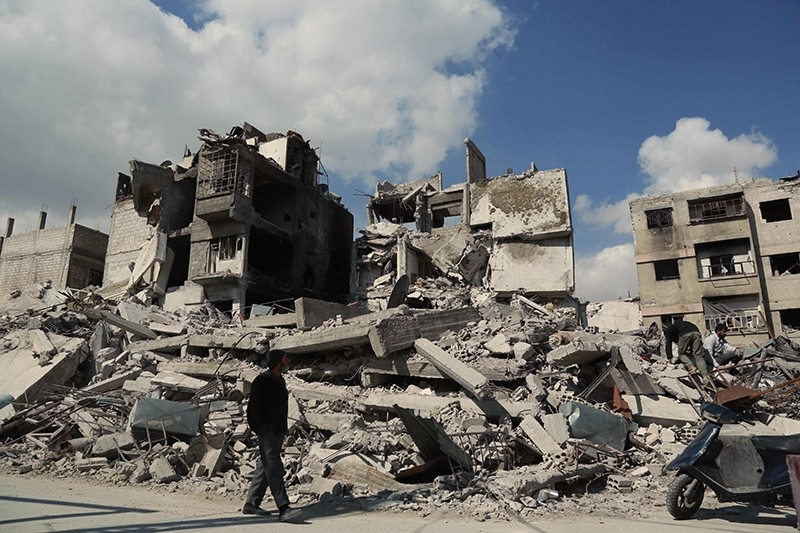 A Syrian man walks past a buildings which was destroyed earlier in regime air strikes, in the opposition-held besieged town of Douma in the eastern Ghouta region, on the outskirts of the capital Damascus, on February 28, 2018. (AFP Photo)
by Compiled from Wire Services Mar 03, 2018 12:00 am

Assad regime forces on Saturday made a new advance in the besieged opposition enclave of eastern Ghouta near the capital Damascus, controlling the town of al-Shayfouniya, a war monitor said.

Al-Shayfouniya has been under intensified shelling by regime warplanes which dropped rockets, bombs and barrel bombs, destroying different parts of the town, according to the Syrian Observatory for Human Rights.

The Britain-based watchdog said it learned that Failaq al-Rahman joined the fighting side by side with the opposition group Jaish al-Islam to repel the advance of the regime forces in eastern Ghouta.

Since Thursday, regime forces have advanced inside the region, retaking an area in the enclave's southeast, as well as another and two military bases in the south from main opposition group Jaish al-Islam.

"Regime forces and their allies have intensified their attacks on rebel positions in the past 48 hours," Observatory head Rami Abdel Rahman said.

Government fighters are trying to advance inside Eastern Ghouta to cut off the main town of Douma and its surroundings in the north of the enclave, as well as isolate the southeastern area of Al-Marj, Abdel Rahman said.

The Observatory says "Russian advisors" are taking part in the battles alongside regime forces in eastern Ghouta, backed by heavy air strikes and shelling.

This week, Russia, a major ally of Bashar al-Assad, declared a daily five-hour pause in hostilities in eastern Ghouta in order to allow the evacuation of civilians from the enclave.

The daily pause falls far short of a nationwide 30-day ceasefire demanded by the U.N. Security Council at the weekend.

Six civilians, including a child, were killed on Saturday in regime bombings on two other towns in the enclave, according to the observatory.

More than 600 civilians have been killed in the enclave since February 18 when Syrian forces started an intense campaign there.

Eastern Ghouta's 400,000 residents have lived under regime siege since 2013, facing severe food and medicine shortages even before the latest offensive.

More than 340,000 people have been killed and millions have fled their homes since the start of Syria's civil war in 2011 with the brutal repression of anti-government protests.