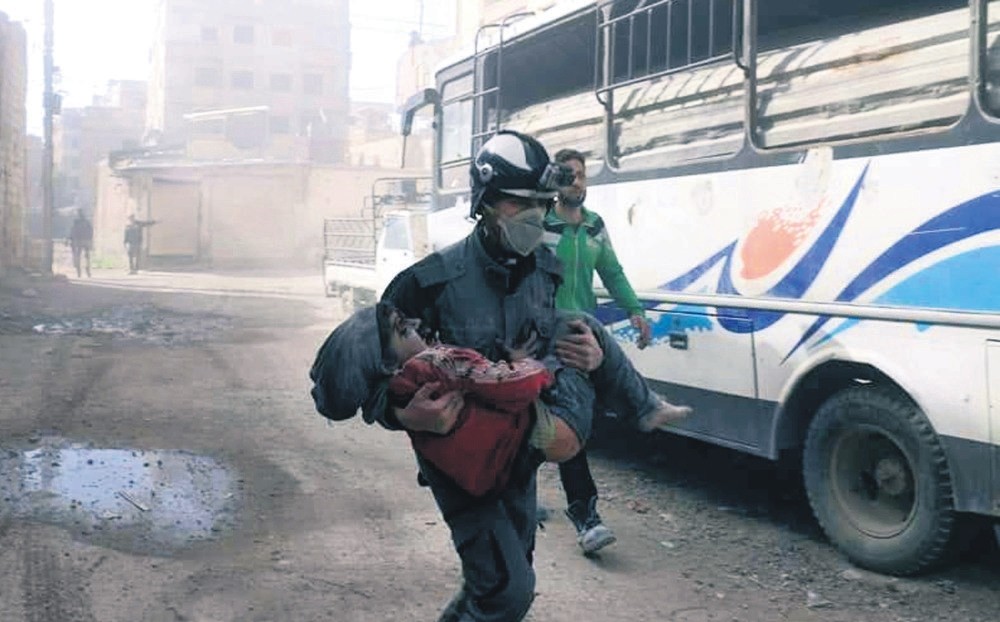 This photo provided by the Syrian Civil Defense White Helmets shows a member of the group carrying a boy wounded in airstrikes and shelling by pro-Assad forces in Eastern Ghouta on Friday.
by Daily Sabah with AFP Mar 03, 2018 12:00 am

The international community is putting pressure on the Assad regime of Syria as Eastern Ghouta, an enclave outside the Syrian capital Damascus, suffers under a blockade and attacks by Assad forces.

More than 600 civilians have been killed in Eastern Ghouta since Russia-backed regime forces launched an assault on Feb. 18. Eastern Ghouta's 400,000 residents have lived under a regime-imposed siege since 2013, facing severe food and medicine shortages even before the latest offensive.

The U.N. Human Rights Council was to hold an emergency session later Friday on the crisis, as dozens of aid trucks remained unable to enter the enclave. The U.S., Germany and France upped the pressure on Damascus after a U.N. Security Council demand for a cease-fire failed to stem the fighting. U.S. President Donald Trump and German Chancellor Angela Merkel agreed in a phone call that the Syrian regime must be held accountable. "This applies both to the Assad regime's deployment of chemical weapons and for its attacks against civilians and the blockade of humanitarian support," a German chancellery statement said.

Trump and French President Emmanuel Macron, meanwhile, vowed there would be "no impunity" in the event of further chemical weapons use in Syria. Washington has asked the U.N. Security Council to set up a new inquiry into chemical weapons attacks in Syria after reports of suspected chlorine use in Eastern Ghouta, according to a draft resolution obtained by Agence France-Presse (AFP) Thursday.

Syrian government has denied using chemical weapons and Russia has questioned the U.N. findings that it carried out sarin and chlorine attacks. It was unclear when the U.S. proposal, or a separate Russian draft resolution, on the Syrian chemical inquiry would come to a vote.

On Friday, distrust ran high among civilians in Eastern Ghouta on the fourth day of a daily five-hour "humanitarian pause."

The pause announced by Russia has tempered but not halted the bombing, which has ripped through houses and reduced residential areas to grey rubble.

Embattled Syrian civilians have not left the enclave, despite a Russian offer of safe passage out during the daily halt in fighting. "People are still in their cellars because they don't feel safe," a 24-year-old who gave his name as Mohammed told AFP in the devastated town of Hammuriyeh. Damascus and Moscow accuse the armed opposition of preventing civilians from leaving. In the main town of Douma, 25-year-old Malik Mohammad told AFP the daily pause had not brought any peace of mind to civilians. "During the pause, the bombing continues for five hours outside Douma, and as soon as it ends, it starts up again inside."

Early Friday, before the pause's 7 a.m. GMT start, warplanes pounded areas including Douma and the town of Zamalka, the Syrian Observatory for Human Rights said. Rockets fell on Douma and Harasta during the pause, the Britain-based war monitor said, as regime forces advanced on the southern outskirts of the enclave. People in Eastern Ghouta are surviving on what little food they have, sometimes relying on meager meals of rice and bread from local charities, an AFP correspondent said. The price of rice and pasta has soared, as they become increasingly rare in shops. Those who grow food have been unable to visit their land due to the bombardment. On Thursday, Jan Egeland, the head of the U.N.'s humanitarian task force for Syria, said he hoped aid convoys may be able to go to Eastern Ghouta "in the next few days."

He said the U.N. "may have the first facilitation letter, permit from the government, to go to Douma in a very long time."The only civilians known to have left Eastern Ghouta so far since the "humanitarian pause" took effect are an elderly Pakistani couple who were evacuated Wednesday to Damascus.

More than 340,000 people have been killed and millions displaced since Syria's civil war started in 2011 with the brutal repression of anti-government protests.