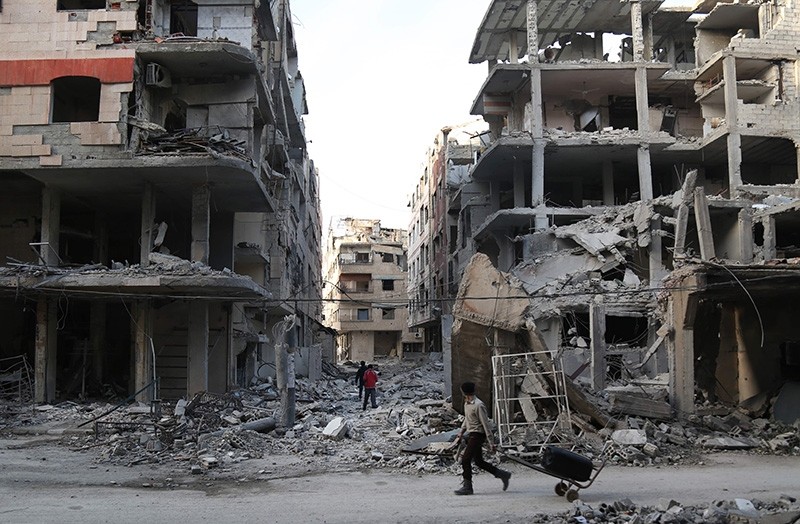 A Syrian youth pulls a cart as he walks down a street past destroyed buildings in the opposition-held besieged town of Ayn Tarma in the eastern Ghouta (AFP Photo)
by Compiled from Wire Services Mar 04, 2018 12:00 am

Advances by Assad regime forces into opposition-held eastern Ghouta are causing many people to flee, a pro-Syrian opposition television station and a witness in the enclave said Sunday.

The witness said people had fled areas where regime forces had seized ground at the eastern periphery of the opposition enclave, and were seeking shelter in areas in the heart of the eastern Ghouta.

Syria's Central Military Media says regime forces captured at least six villages and towns along the edge of eastern Ghouta. Opposition groups launched a counteroffensive Sunday, sending fighters behind regime lines in a series of attacks. The Syrian Observatory for Human Rights (SOHR) says the opposition regained control of at least one town, while fighting continues.

SOHR reported later Sunday that the Assad regime forces have seized roughly one quarter of eastern Ghouta in recent days.

"Most of it is farms and there are few towns in (the captured area)," Observatory Directory Rami Abdulrahman told Reuters.

Eastern Ghouta, home to some 400,000 people, has been under a crippling siege and daily bombardment for months. No civilians have exited through a humanitarian corridor set up by Russia and the Assad regime nearly a week ago.

Both sides have been locked in fierce fighting in the region since Feb. 25, when regime forces stepped up attacks to seize eastern Ghouta, one of the last remaining areas near Damascus still under opposition control.

At least 120 regime soldiers and opposition fighters have since been killed in clashes there, the Britain-based Observatory reported.

This week, Russia, a major ally of Assad, declared a daily five-hour humanitarian ceasefire in eastern Ghouta, but continued violence has marred the truce.

A total of 400,000 people in the region have largely been cut off from humanitarian aid, and activists have warned that the situation is dire, with food and medical supplies quickly running out.