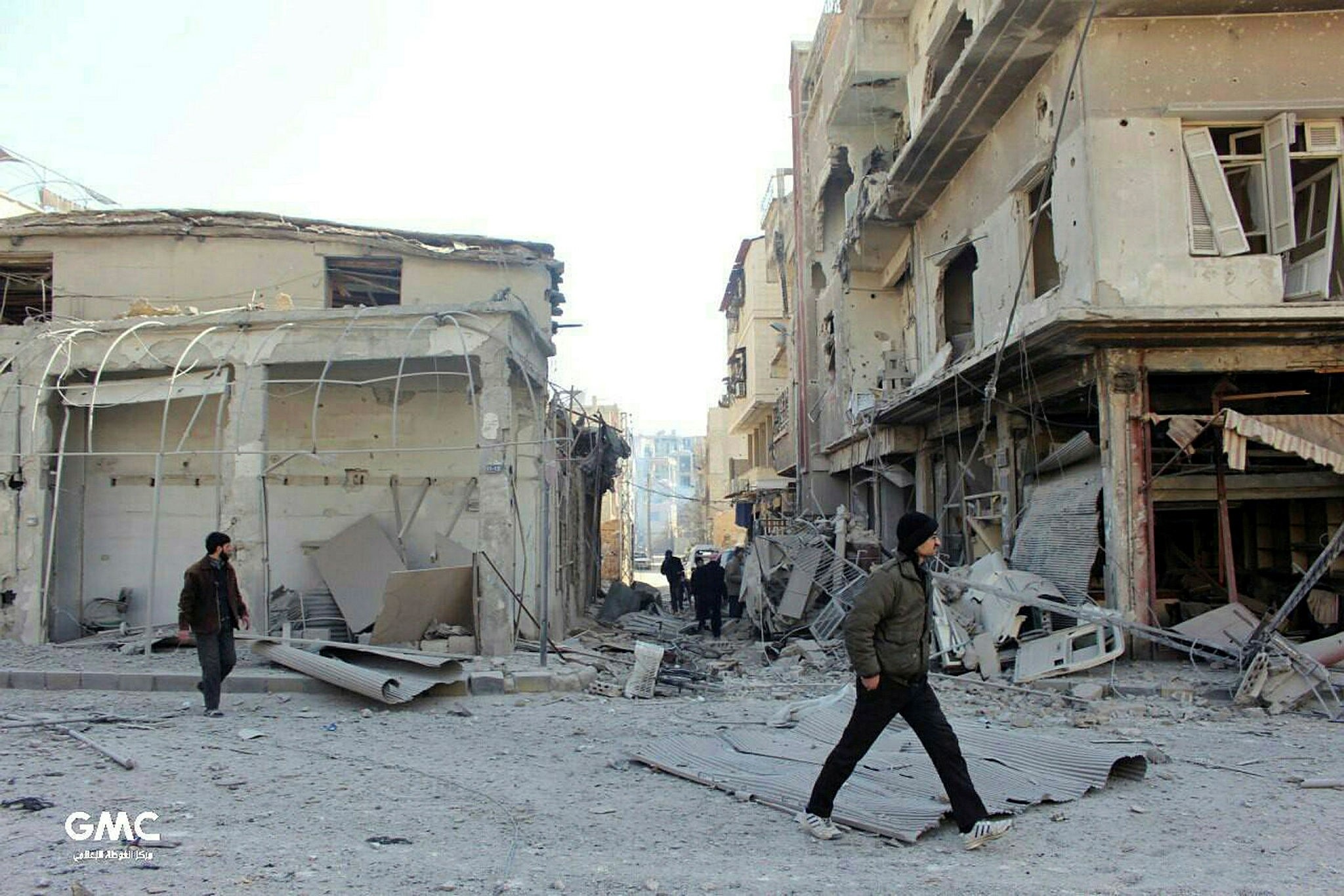 Syrians walking between destroyed buildings in Douma, after airstrikes and shelling by Syrian regime forces hit in the Eastern Ghouta region near Damascus, March. 1.
by Yusuf Selman İnanç Mar 05, 2018 12:00 am

Just as the aerial attacks continue to ruin the besieged enclave of Eastern Ghouta, the regime and Iranian proxies have launched a ground assault, making gains around the opposition area

For more than a month, an opposition enclave nearby the Syrian capital Damascus is under intensive attack as the death toll has exceeded at least 500 while some sources claim there are more than a thousand dead while the number of people under rubble is unknown. The residents of Eastern Ghouta, under siege for almost four years, are deprived of any type of aid. Neither medical equipment nor food is allowed inside. Although some international organizations attempt to deliver aid from time to time, the regime either blocks doing so or compels them to hand over the materials for their own use. Not only aid but also civil defense units are not allowed either. As a result, due to the fact that the rubble of the ruined buildings cannot be cleaned, the corpses under the rubble cannot be taken out.

For a week, the regime launched a major ground assault in addition to the continuing aerial attacks. While Russia has been playing a pivotal role in carrying out the air attacks, Iran and its proxies, particularly the Lebanon-based Shiite militant group Hezbollah, are leading the ground assault. News agencies said the ground forces have captured several villages and been continuing to penetrate the enclave. "The Observatory [Syrian Observatory for Human Rights] said they had taken almost complete control of the town of al-Shayfouniya on Saturday. The Jaish al-Islam rebel group said in a statement its fighters had withdrawn from positions in two areas, one of them in al-Shayfouniya, due to intense bombardment. It accused Bashar Assad and Russia of waging a 'scorched earth' campaign. The military news service run by Hezbollah, an Iran-backed Lebanese group that fights on Assad's side, named three other areas it said the Syrian army had captured at the eastern and southeastern rim of the rebel enclave," Reuters reported over the weekend.

Despite peace efforts by the international community, including the U.N. and Turkey, the regime and its backers have not stopped continuing their shelling and attacks. Finally, the U.N. called for a truce at the U.N. Security Council. Yet, the regime continued its attacks under the pretext that opposition groups did not abide by the cease-fire. Russia, last week, ordered a humanitarian pause in an attempt to demonstrate its clout in the deadly civil war. However, it was not realistic and did not work. Claiming to evacuate the wounded, the pause was violated by the regime and at last failed since it was impossible to let hundreds of people out in five hours.

It has long been claimed that the regime's atrocities should be considered within the definition of war crimes. Once again, Zeid Ra'ad al-Hussein, the U.N. High Commissioner for Human Rights, said the perpetrators of such crimes in Syria were identified and dossiers were being built for future prosecutions. "Despite this rare example of unanimity, civilians in Eastern Ghouta have reported that airstrikes and shelling continue. Once again, I must emphasise that what we are seeing, in Eastern Ghouta and elsewhere in Syria, are likely war crimes, and potentially crimes against humanity. Civilians are being pounded into submission or death," he said in Geneva last week.

Things are easier for the regime in Eastern Ghouta, a besieged city, located near Damascus. Far from any border, encircled with the regime-held areas and being frequently subjected to intra-opposition conflict, Eastern Ghouta has a less complicated situation in terms of the influences of certain actors. Despite the fact that as many as 400,000 people live in the city with insufficient medical facilities and food, the regime is more free to conduct attacks or to continue blocking the delivery of international aid. Although the U.N. considers the siege and deprivation of water and food to be war crimes, there has been no successful attempt to break the siege. The failure of aid deliveries points to the U.N.'s difficulty in tackling the humanitarian crisis.