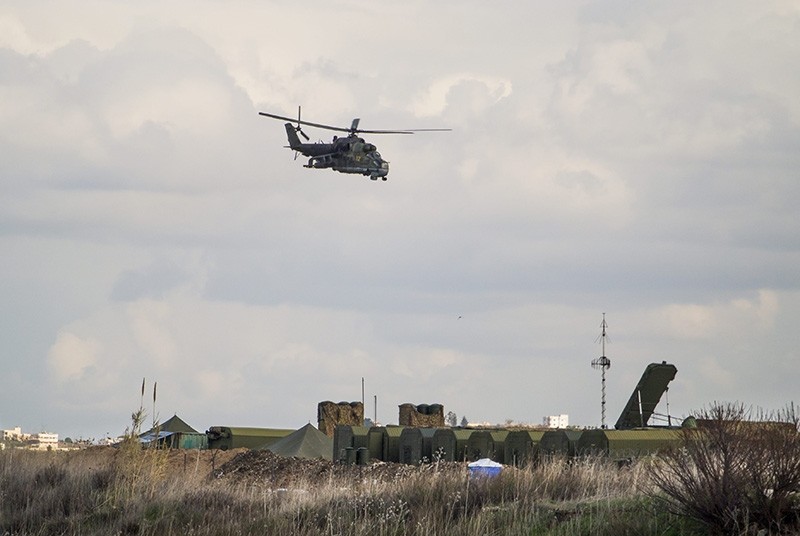 A Russian helicopter gunship flies on patrol while air defense missile systems are seen in the background, bottom, at Hemeimeem air base in Syria Wednesday Jan. 20, 2016 (AP File Photo)
by Compiled from Wire Services Mar 06, 2018 12:00 am

A Russian cargo plane crashed while trying to land at Hemeimeem airbase in Syria, killing 32 people onboard, the Russian Defense Ministry said Tuesday.

The AN-26 cargo plane crashed in Syria, killing 26 passengers and six crew members, just 500 meters (1,600 feet) from the runway. The military blamed the crash on a technical error.

Russia, a key ally of Syria's Assad regime, leases a military base in Syria near the Mediterranean coast.​

In December 2016, a plane carrying a Russian military orchestra to Syria crashed in the Black Sea, killing all 92 people on board.

There have also been deaths and injuries among Russian forces in Syria. In one incident, in February this year, Syrian opposition shot down a Russian warplane and killed its pilot on the ground after he ejected.

About 300 men working for a Kremlin-linked Russian private military firm were either killed or injured in Syria last month when their column was attacked by U.S.-led coalition forces, according to three sources familiar with the matter.

Russian officials said a handful of Russian citizens may have been killed in that incident, but said they were not members of Russia's armed forces.

Russian President Vladimir Putin, who is running for re-election later this month, ordered "a significant part" of Moscow's military contingent there to start withdrawing in December, declaring their work largely done. But casualties continue to mount.