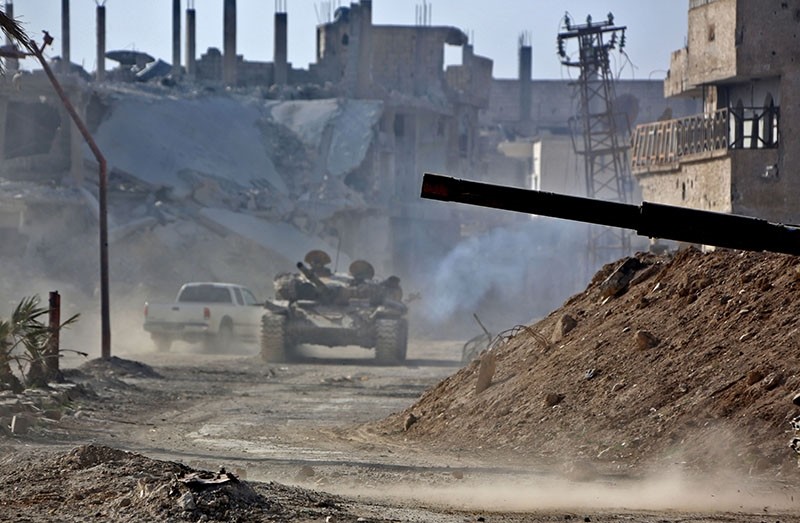 A regime tank rolls in the former opposition-held area of Beit Nayem in the eastern Ghouta region on the outskirts of the capital Damascus on March 6, 2018. (AFP Photo)
by Compiled from Wire Services Mar 07, 2018 12:00 am

The Assad regime is shipping in hundreds of new fighters to take part in its offensive to capture the last opposition-held stronghold outside the capital Damascus, a monitoring group said Wednesday, despite efforts to impose a humanitarian ceasefire.

The United Nations and Red Cross, organizations which delivered a small aid shipment this week to eastern Ghouta, have reported a desperate humanitarian situation, including hunger and shortages of medicines. People are living underground to avoid airstrikes.

"The regime is preparing to continue its offensive hoping for new advances in the area," Rami Abdel Rahman, head of the Observatory, told dpa.

Syrian state television on Wednesday said Syrian army units were attacking militant defenses in the rebel-held eastern Ghouta town of Mesraba with preparatory fire to secure the entry of infantry units, citing its correspondent there.

It broadcast live footage from the outskirts of Mesraba, whose capture would nearly cut the enclave in two, showing very large clouds of smoke rising into the air behind a row of buildings along with the sound of a jet and the noise of blasts.

According to the Observatory 805 civilians, among them 178 children, were killed in eastern Ghouta since February 18.

The U.N. Security Council last month voted for a nationwide ceasefire which specifically urged parties to the conflict to allow aid into eastern Ghouta. However, nearly half the enclave has been taken by regime forces in recent weeks.

The aid shipments made this week were not sufficient for even 10 percent of the population and the government reportedly removed vital supplies, including medical goods. Many of the trucks were unable to fully unload their contents due to violence.

The regime offensive in the besieged enclave of eastern Ghouta cannot be justified by its targeting of a few hundred fighters, United Nations human rights chief Zeid Ra'ad al-Hussein said in a speech on Wednesday.

"Recent attempts to justify indiscriminate, brutal attacks on hundreds of thousands of civilians by the need to combat a few hundred fighters – as in Eastern Ghouta – are legally, and morally, unsustainable," he told the U.N. Human Rights Council.

"Also, when you are prepared to kill your own people so easily, lying is easy too. Claims by the Government of Syria that it is taking every measure to protect its civilian population are frankly ridiculous."