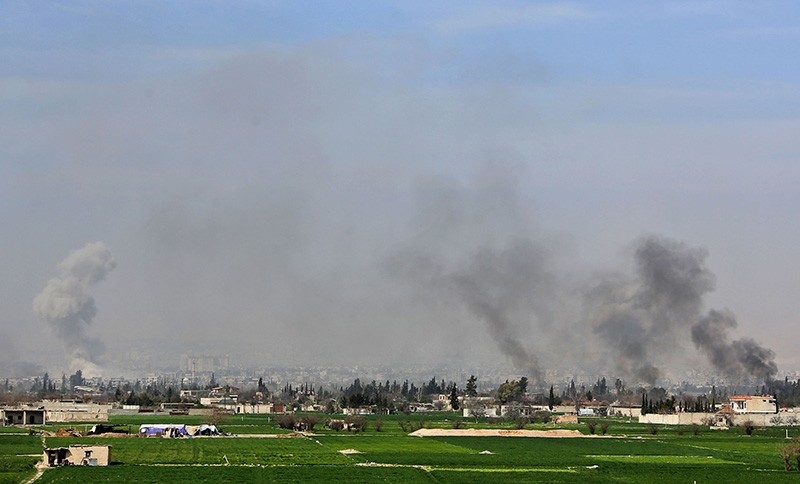 A picture taken on March 7, 2018 shows smoke plumes rising following Assad regime strikes on the village of Mesraba in the besieged eastern Ghouta region on the outskirts of the capital Damascus. (AFP Photo)
by Compiled from Wire Services Mar 07, 2018 12:00 am

The Syrian Observatory for Human Rights said on Wednesday pro-Assad regime forces have effectively cut the opposition-held eastern Ghouta enclave in half.

The Britain-based war monitor said the forces had brought the strip of territory linking the north and south of eastern Ghouta within firing range, effectively bisecting the densely populated area on the outskirts of Damascus.

The symbolic mark was reached "after forces retook Al-Ashaari and Beit Sawa towns as well as farmland in the center and north of eastern Ghouta," he told AFP.

After attacking mostly from the air -- in a campaign that involved Russian warplanes and saw regime aircraft using barrel bombs -- pro-regime forces launched a ground offensive.

Regime forces have yet to take on the two main towns of Douma and Hammuriyeh or any of the most populated areas of the enclave on the capital Damascus' outskirts.