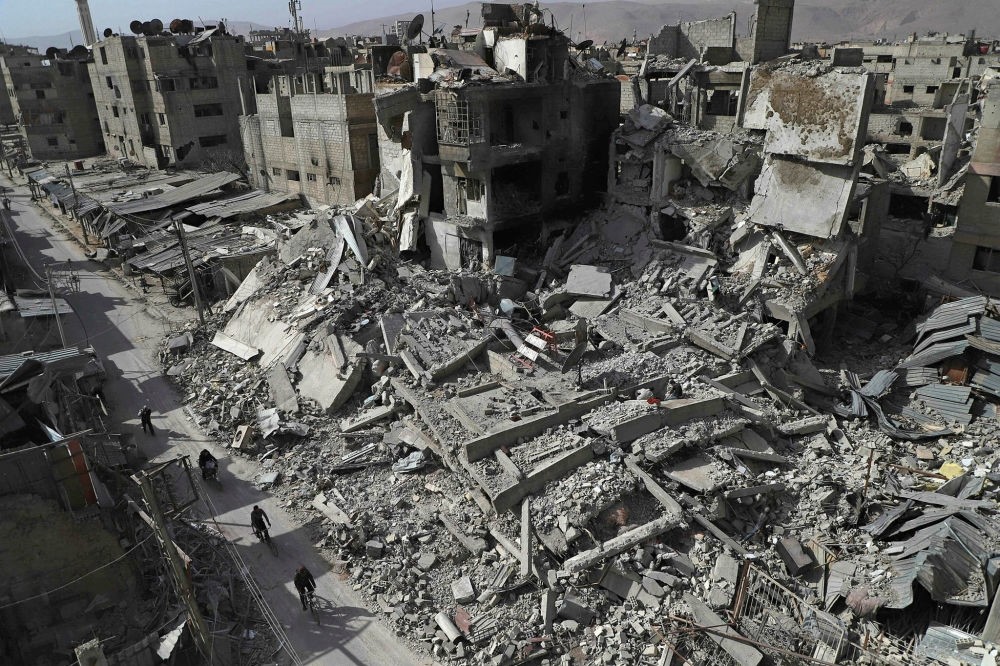 Buildings destroyed in Syrian regime attacks in Douma, in the opposition enclave of Eastern Ghouta on the outskirts of Damascus, March 5.
by Compiled from Wire Services Mar 07, 2018 12:00 am

The Assad regime continues to target civilians in besieged Eastern Ghouta with chlorine gas attacks despite a U.N. Security Council resolution calling for a 30-day cease-fire

Despıte a U.N. Security Council (UNSC) resolution demanding a 30-day cease-fire in Eastern Ghouta, the Syrian regime showed no signs of easing its assault on the beleaguered enclave, as another suspected chlorine attack was reported yesterday. At least 30 people were treated for breathing difficulties after a regime chlorine gas attack in the Damascus suburb of Eastern Ghouta, according to a Syrian civil defense agency yesterday.

Several children and women were among the victims of the attack in Hamuriye town on Monday, the White Helmets said in a statement. The civil defense agency said two of its rescue workers were among the casualties.

Last month, a Syrian child was killed in a regime gas attack in Eastern Ghouta, prompting the Hague-based Organization for the Prohibition of Chemical Weapons (OPCW) to launch an investigation into the attack.

President Recep Tayyip Erdoğan harshly criticized U.N. ceasefire resolutions for Syria's eastern Ghouta, amid unrelenting attacks by the Assad regime, which are still targeting civilians and resulting in a significant amount of casualties.

"The recent incidents in eastern Ghouta are hard to swallow, they do not befit humanity," Erdoğan told ruling Justice and Development Party (AK Party) lawmakers in the parliament yesterday.

"The resolution that never went into effect has no meaning for humanity," Erdoğan said, in reference to a 30-day ceasefire resolution passed by the U.N. Security Council on Feb. 24.

The president accused the UNSC of "manipulating humanity," saying that the global body only passes such resolutions to deceive the world that they are actually taking action against crimes committed against civilians.

Previously, Erdoğan has criticized the Security Council's structure of five permanent members, arguing: "The world is greater than five."

Despite the fact that as many as 400,000 people live in the city with scarce medical facilities and food, the regime has continued attacks and blocking the delivery of international aid. Even though the U.N. considers the siege and deprivation of water and food to be war crimes, all attempts to end the blockade have been unsuccessful. Russia, the main backer of the Assad regime along with Iran, ordered a humanitarian pause in an attempt to demonstrate its clout in the deadly civil war. The pause was set for five hours to create a corridor to allow civilians to exit the area. The Russian Defense Ministry said it would help injured civilians leave the town. Yet, the pause has been violated by the regime.

Meanwhile, the first aid delivery in weeks to reach the besieged eastern suburbs of Damascus was cut short after Syrian regime forces began shelling the area while aid workers were still inside, a local council said yesterday.

Monday's shipment was the first to enter eastern Ghouta amid weeks of a crippling siege and a government assault that has killed hundreds of civilians since Feb. 18.

The International Committee for the Red Cross (ICRC) confirmed that its joint convoy with the United Nations had to leave before offloading all its supplies on account of the deteriorating security situation.

Ingy Sedky, the ICRC spokeswoman in Syria, said most of the aid from a 46-truck convoy was delivered to the town of Douma in eastern Ghouta but the mission was cut short before the rest of the supplies could be unloaded, as reported by AP.

Iyad Abdelaziz, a member of the Douma Local Council, said nine aid trucks had to leave the area after government shelling and airstrikes intensified in the evening.

The convoy that reached Douma on Monday carried only a fraction of the relief needed for the estimated 400,000 people trapped under the government's siege. The U.N.'s humanitarian office said the convoy carried food for 27,500 people. But it said the Syrian regime offloaded 70 percent of the health supplies, including trauma and surgical kits and insulin, before allowing the convoy to enter eastern Ghouta. The regime routinely removes lifesaving medical supplies from aid convoys, in a pattern of denying such aid to civilians living in opposition areas. U.N. officials have complained for years about such actions by the Syrian regime.