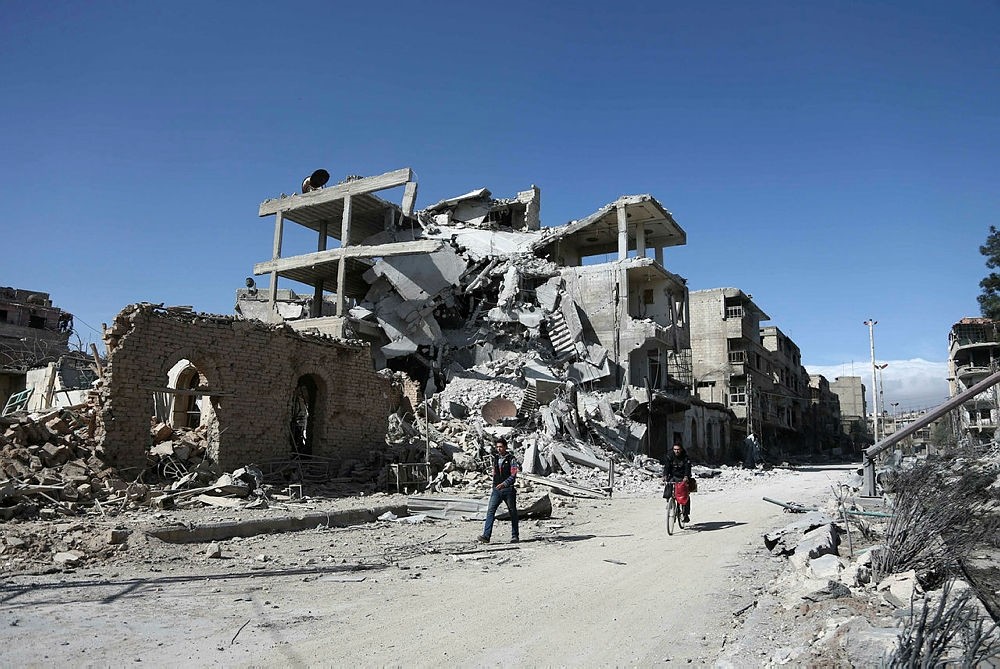 Syrians walk past destroyed buildings in the rebel-held town of Hamouria, in the besieged Eastern Ghouta region on the outskirts of the capital Damascus, on March 9, 2018. (AFP Photo)
by Mar 10, 2018 12:00 am

More than 1,000 civilians have been killed since Syria's regime launched a brutal offensive on the opposition-controlled Eastern Ghouta enclave nearly three weeks ago, a war monitor said on Saturday.

"The death toll has gone up to 1,002 civilians after eight people were killed today in Harasta and Arbin," said the Syrian Observatory for Human Rights.

Rescue workers on Saturday pulled the bodies of 17 people, including members of three separate families -- from under the rubble of destroyed buildings in Douma.

Douma is the largest urban center in Syria's Eastern Ghouta, and regime forces on Saturday were able to isolate it from the rest of the opposition bastion.

Government troops and allied militia have recaptured half of the besieged region in a blistering assault launched on February 18.

At least 215 children are among those killed since then, the Britain-based Observatory said.

Shelling and air strikes slammed into Douma throughout the day Saturday, trapping residents inside cellars transformed into makeshift bomb shelters, an AFP correspondent in the town said.

Rescue workers and medics were struggling to navigate the town's rubble-littered roads to reach the wounded and take them to field clinics.