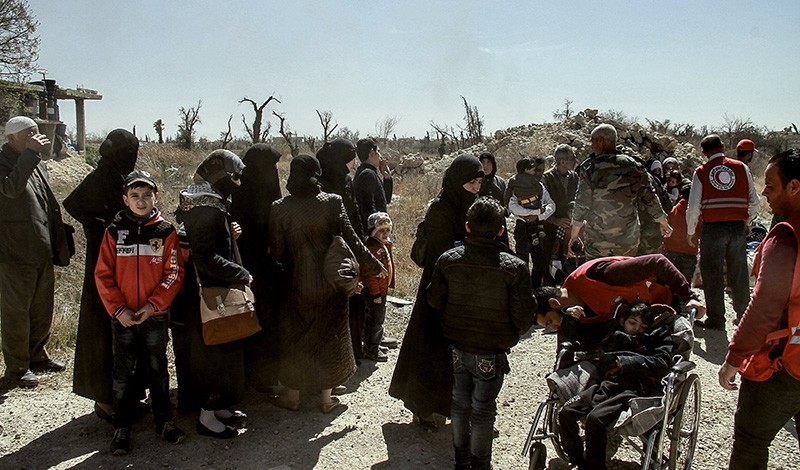 A handout photo made available by the official Syrian Arab News Agency (SANA) shows members from the Syrian Red Crescent and the International Red Cross help the exit of a new batch of besieged civilians (EPA Photo)
by Compiled from Wire Services Mar 15, 2018 12:00 am

Thousands escaped Syria's opposition-held eastern Ghouta into regime-held territory on Thursday, AFP correspondents on both sides said, in the largest numbers since the regime assault on the enclave began.

They were seen fleeing on foot, in cars and on motorcycles via the town of Hamouria, where the Syrian army had opened a corridor after a late-night advance.

Men, women and children carrying blankets, bags and suitcases walked along a dirt road towards regime-held positions on the outskirts of Hamouria town, footage broadcast by al-Mayadeen, a pro-regime TV station, showed.

The Syrian Observatory for Human Rights said more than 3,000 people had left Hamouria town toward positions held by advancing regime forces, which have splintered eastern Ghouta into three separate pockets.

It marked the first time a large group of people had fled the enclave since the army launched an offensive to recapture it last month, Observatory Director Rami Abdulrahman said.

Earlier this week, scores of sick and wounded people were evacuated from eastern Ghouta.

What had been the Syrian opposition's largest piece of territory near the capital Damascus has been split into three encircled pockets by a regime offensive that began nearly a month ago.

Moscow and Damascus say their forces only target armed militants and seek to stop mortar attacks by insurgents that killed dozens of people in the capital.

The U.N. estimates that close to 400,000 people are trapped inside the regime's siege of eastern Ghouta. They are running out of room to flee as regime forces close in on the space.

According to Syrian Civil Defense, also known as White Helmets, the organization's first responders were unable to reach the wounded in several other towns in eastern Ghouta because of the intensity of the assault. It said one of its rescue workers was killed in an airstrike on the town of Hazeh.

"They are burning Ghouta to the ground," said Anas al-Dimashqi, a media activist and resident of Kafr Batna, a town also targeted in intense airstrikes Thursday.

Dimashqi, the White Helmets and the Syrian Observatory for Human Rights reported that government and Russian aircraft were using napalm-like incendiary weapons to spread fires in the towns.

Assad regime and Russian forces also targeted a column of civilians trying to flee another town, Hamouria, early Thursday, according to the activists and the Observatory. At least 26 civilians were killed Hamouria on Wednesday, the Observatory said earlier.