Thousands flee from severity to unknown from Eastern Ghouta 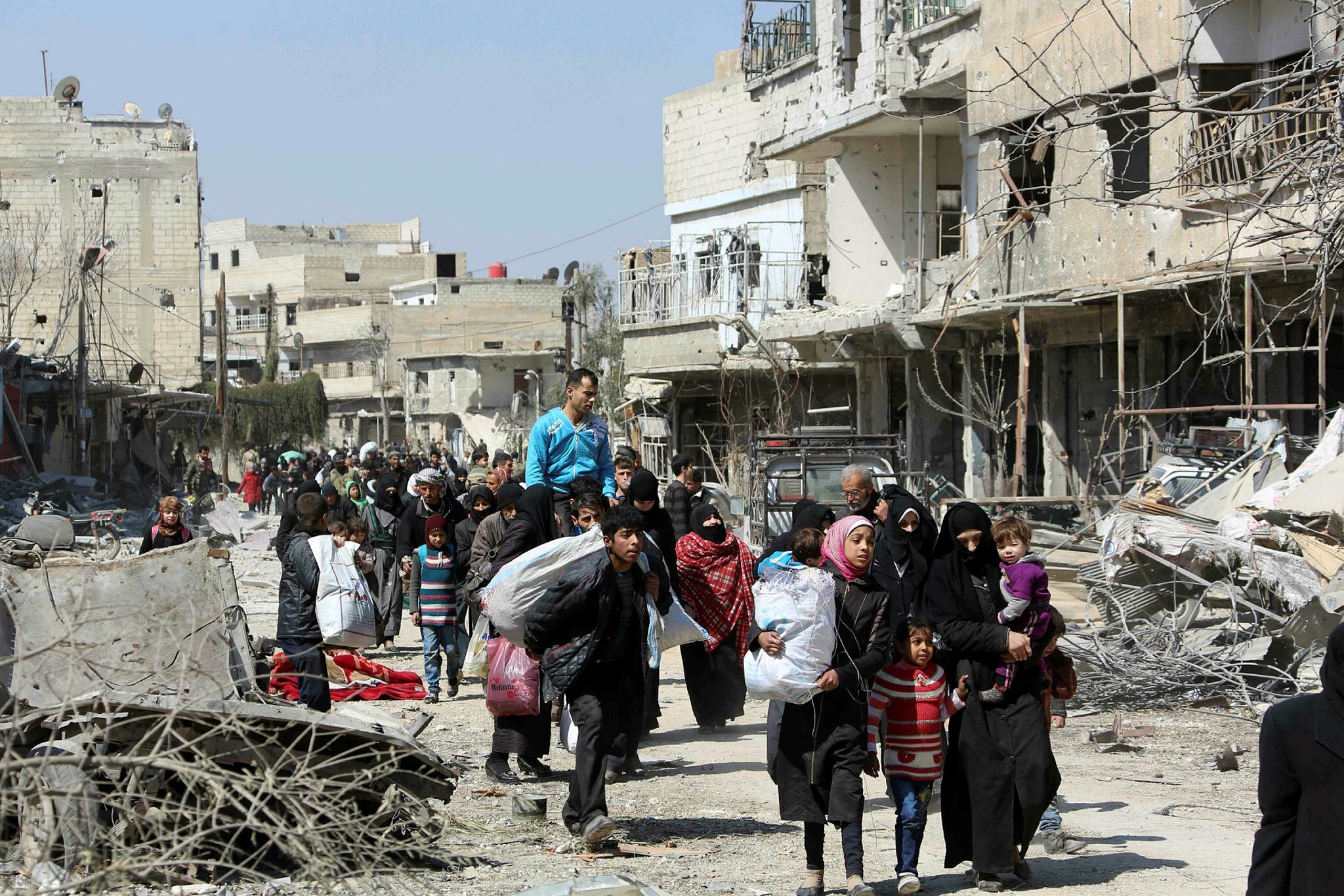 Syrian civilians evacuate the town of Jisreen in Eastern Ghouta, on the outskirts of the capital Damascus, to areas under government control, March 17.
by Yusuf Selman İnanç Mar 19, 2018 12:00 am

The regime and its main backers, Russia and Iran, continue their brutal and reckless operation in Eastern Ghouta while thousands of people have fled for their lives with no knowledge on their futures

Last week marked the eighth year of the Syrian war, which has over the course of time, dragged international and regional actors apart from the indigenous warring groups. Despite the killing of more than 500,000 people and some claims that the number has already exceeded a million, the scenes have not changed across the country.

One of the most severely damaged cities during the war has been Eastern Ghouta, which has witnessed the use of chemical weapons for the first time in the war, in its first year. Yet, it had also been one of the enclaves where the opposition groups, along with the people, have demonstrated a valiant resistance against the fierce attacks of the regime as well as of its main backers, namely Russia and Iran. The regime forces, cutting the supplies of food, potable water, medical equipment and other necessary things to meet the daily necessities, besieged the small town. The seige had not prevented its people from challenging the autocratic rule of Bashar Assad.

The envied resistance seems to be coming to an end as thousands of people are fleeing from the enclave desperately into an unknown. Located in the suburbs of Damascus and encircled with regime-controlled territories, Eastern Ghouta's residents have no plan for where to be settled but aim to leave the reckless assaults and bombardments behind.

In the latest attacks, over the course of a month, more than a thousand people died while the real death toll cannot be known exactly since many corpses are still under rubble, the cleaning of which is impossible under the siege. Civil defense units and rescue workers are prevented from carrying out their works. The regime has also prevented several aid convoys from entering the enclave. Although some have been granted permission, the opposition sources claimed that the medical supplies have been extracted from the trucks by the regime forces.

Besides the aerial attacks, the regime has launched a major ground operation as a result of which the densely populated enclave has been divided into three, cutting the main roads and the intersections of the neighborhoods. Therefore, the besiegement and the lack of supplies have been affecting the daily lives of people more acutely. The Iranian-backed proxy groups, led by the Lebanese-based Shiite militants Hezbollah, have captured several towns, arresting and arbitrarily killing many. "Regime forces have retaken some 80 percent of Eastern Ghouta since launching a brutal air and ground offensive on Feb. 18, carving it up into three ever-smaller pockets held by different rebel groups. In their latest advances Saturday pro-government forces took control of the two towns of Kafr Batna and Sabqa in the southern pocket," Agence-France Presse (AFP) reported Sunday.

Tens of thousands of Eastern Ghouta residents have left the city, leaving everything behind. Taking only personal belongings, thousands have started emptying the enclave. Those who found a vehicle were lucky while many were left to walk. "Syrian state television showed dozens of civilians, men, women, children and the elderly, plodding along a road leading into regime-held territory. Several dragged suitcases while others carried children, kicking up dust from the road as they marched.

Those fleeing clutched blankets or wore thick winter coats. Some civilians who have arrived in government-controlled territory have complained of having nowhere to sleep," AFP's report said. The U.N. High Commissioner for Refugees (UNHCR) in Syria said more than 10,000 people left the city. "The majority of those leaving are from the Hamouriyah area, but also include some medical cases from Douma," Mysa Khalaf, UNHCR's spokesperson, said. "The actual number of people who have exited Eastern Ghouta is not known, nor are the destinations of all evacuees," she added. On the humanitarian situation she said, "The overall humanitarian scene is dire. The U.N. has delivered emergency items such as food, mattresses, blankets and hygiene kits and is preparing for further assistance to be delivered in response to the growing numbers of people arriving at the shelters."

Despite the fact that thousands have left, Eastern Ghouta remains home to 400,000 people. Therefore, it seems impossible to evacuate the whole city. At the same time, the regime and Russia have not stopped the airstrikes.