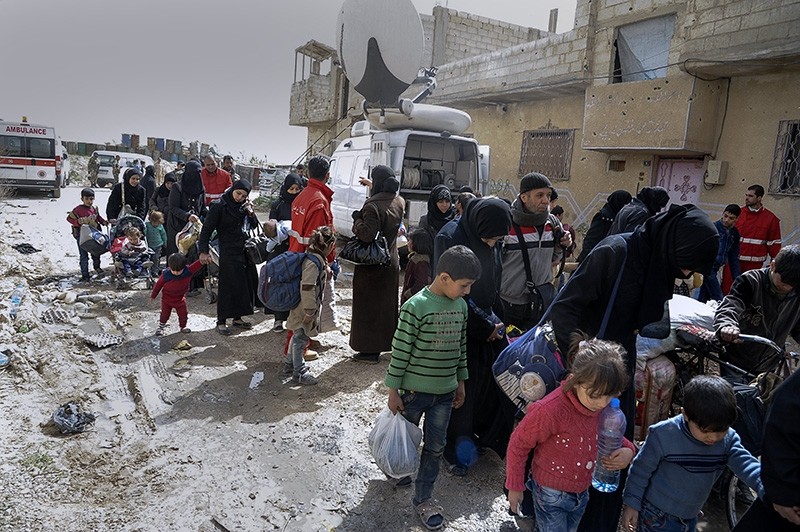 Opposition fighters and civilians started leaving a pocket in eastern Ghouta near the Syrian capital Damascus on Saturday, a monitor reported, enlarging the regime's control in the former opposition enclave.

Buses carrying hundreds of opposition fighters, their families and other civilians left eastern Ghouta for opposition-controlled areas in the north of the country, the Syrian Observatory for Human Rights added.

Other groups of evacuees will leave eastern Ghouta in the next days under a Russian-brokered deal that the opposition faction Faylaq al-Rahman reached with the regime.

Under the agreement, some 7,000 people, including fighters, were to leave eastern Ghouta's towns of Arbeen and Zamalka, as well as the district of Jobar, which were under Faylaq al-Rahman's control.

Idlib is one of the last remaining opposition strongholds in war-torn Syria.

The deal is the second by an opposition group in eastern Ghouta, which has been the target of an intense regime campaign for more than a month.

Thousands of fighters from the Ahrar al-Sham faction and their families departed eastern Ghouta's town of Harasta this week for opposition-controlled areas in northern Syria under a similar agreement.

An estimated 4,700 people, including 1,300 insurgents, have left Harasta in the past two days, according to the Britain-based Observatory.

Army units started removing barricades and opening streets in Harasta, paving the way for military engineering units to clear the city of explosives left behind by the opposition, the agency added.

The entry comes a day after the last group of opposition left Harasta.

On Feb. 18, forces loyal to the Assad regime started a major operation to retake eastern Ghouta after they had besieged the region for more than four years.

The forces have since advanced deep inside the enclave and split it up, triggering a mass exodus.

Once the key stronghold of opposition fighters near Damascus, at least 90 percent of Eastern Ghouta is now under the government's control, the Observatory reported.

The full recapture of the enclave will mark the biggest victory for al-Assad since December 2016, when his forces regained complete control of the northern city of Aleppo from the opposition following a Russian-backed offensive.

Some opposition groups have condemned evacuation deals as forced displacement.

Russia is a major ally of Assad. In September 2015, Russia started an air campaign in Syria, which has since tilted the balance militarily in favor of Assad.