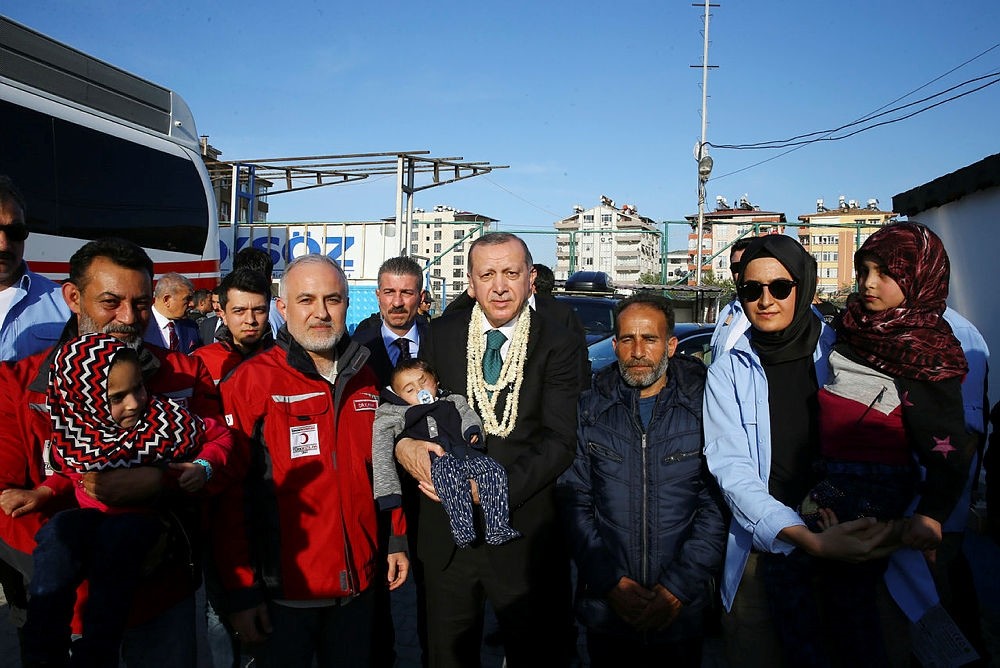 A Syrian infant who became a symbol of the plight of civilian victims of regime attacks finally reached safety in southern Turkey's Hatay on Sunday along with his family.

Karim Abdallah, known as "Baby Karim," along with his father and two sisters first reached northwestern Syrian province of Idlib and met Kerem Kınık, head of the Turkish Red Crescent, which is delivering aid to Syrian civilians.

"Baby Karim didn't get any medical treatment in eastern Ghouta. They didn't let him to get medical care. He was wounded and recovered by himself," said Kınık.

He pledged that Karim and his family will receive treatment in Turkey.

Karim and his family also met President Recep Tayyip Erdoğan, who was seen holding the baby in his arms.

After Idlib, Karim and his family entered Hatay, Turkey via the Cilvegozu border gate, according to Anadolu Agency correspondents on the ground.

Baby Karim had lost one of his eyes as well as his mother in an Assad regime artillery strike on eastern Ghouta.

Karim and his family left eastern Ghouta and came to Idlib as part of compulsory evacuations under a cease-fire agreement offered by Russia, although attacks on civilians there have continued unabated.

Karim Abdallah, who lost his mother — and his left eye — to an airstrike last month in eastern Ghouta, a Damascus suburb, has since become a symbol of resistance against the Assad regime.

Since Karim's story came into a spotlight, many expressed their support for the boy on social media.

Users shared photos of themselves, covering one their eyes with the hashtag #SolidarityWithKarim.

At least 45,000 people have been evacuated from eastern Ghouta since the evacuation process began on March 22.

Evacuees are being accommodated in temporary refugee centers, and at local schools and mosques, in Syria's northwestern Idlib and Aleppo provinces.

The evacuations are part of a Russian-brokered agreement between Syria's Assad regime and armed opposition groups.

On Feb. 24, the U.N. Security Council unanimously adopted Resolution 2401, which called for a cease-fire in Syria — especially in eastern Ghouta — to allow the delivery of humanitarian aid.

Despite the resolution, however, early in March the regime and its allies launched a major ground offensive — backed by Russian air power — aimed at capturing opposition-held parts of the district.

Since Feb. 19, more than 1,400 people have been killed in attacks by the regime and its allies in eastern Ghouta, according to local civil defense sources.

Home to some 400,000 residents, the district has remained under a crippling regime siege for the last five years, which has prevented the delivery of badly needed humanitarian supplies.

Syria has been locked in a devastating conflict since early 2011, when the regime cracked down on demonstrators with unexpected ferocity.