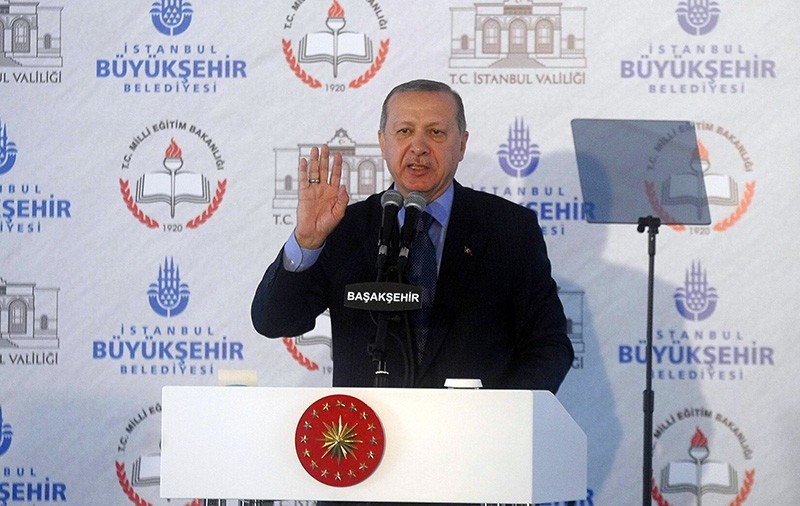 Turkey warned Iraq that it will take action if Baghdad fails to take action against terrorist groups in its territory, President Recep Tayyip Erdoğan said Monday.

"If you can deal with them, deal with them, or else we will come to Sinjar and deal with them. We do not ask for permission from anyone, nor do we look into anyone's eyes for all this," Erdoğan said, speaking at an opening ceremony of 80 schools and 59 school gymnasiums in Istanbul.

The president also said 3,872 terrorists had been "neutralized" since the launch of Operation Olive Branch in Syria's Afrin region.

About his meeting with Turkish soldiers on Sunday in Hatay province bordering Syria, he said they did not show the slightest hesitation in carrying out their duties and remain ready to achieve their new goals.

"You may hear new goals at any moment. Today, Turkey finds terror organization in their dens at the border and breathes down their necks."

He said the terrorists could run but they could not hide from Turkish forces.

"They [terrorists] are hiding, we are chasing them. What happened? They ran off to Syria, to Afrin, to Sinjar," Erdoğan said.

On March 18, Turkish-backed troops liberated the town of Afrin, which had been a major hideout for the terrorist organization PYD/PKK since 2012.

The military also said only terror targets are being destroyed and the "utmost care" is being taken to not harm civilians.

The Turkish president also offered the Iraqi government the option to launch a joint military operation against the terror group, noting that Sinjar had become an alternative to Qandil, the so-called headquarters of the PKK terror group.