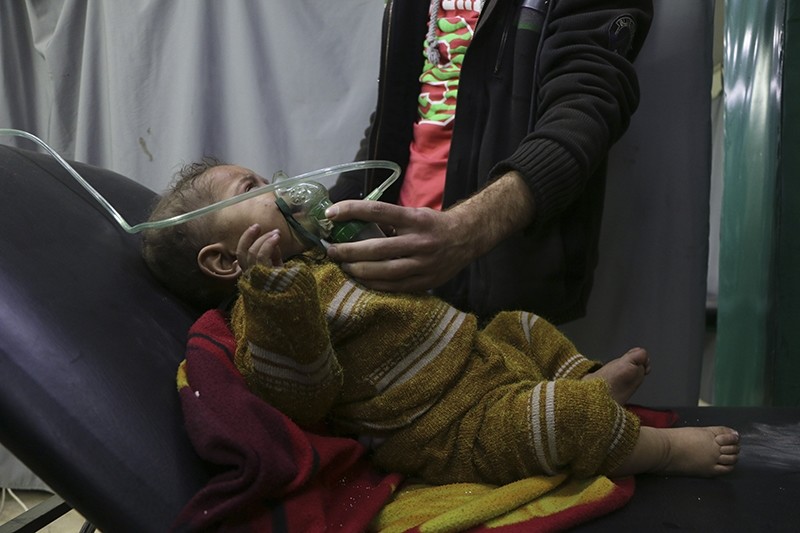 Syrian regime forces have carried out 215 chemical attacks against the opposition since 2011, with the latest strike killing at least 70 and injuring more than 500 others on Saturday.

Last Wednesday, the Syrian Network for Human Rights (SNHR) said 214 attacks had claimed the lives of at least 1,421 people, including 187 children and 244 women.

That count was soon added to, with a deadly strike Saturday in eastern Ghouta's Douma district that killed dozens of civilians, including children and infants, with the death toll expected to rise up to 100. 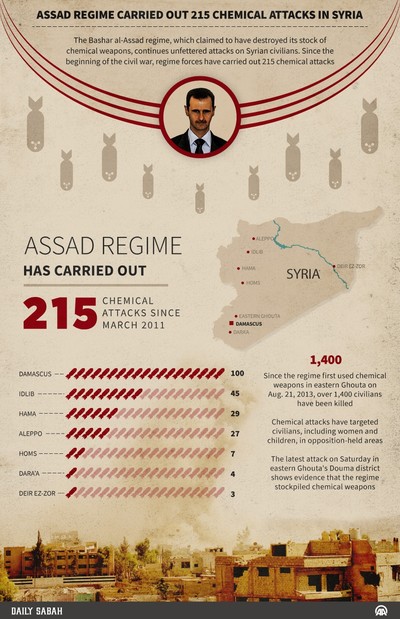 "We strongly condemn the attack ... We expect the international community to show its reaction in the face on the attack and international organizations, including the Organization for the Prohibition of Chemical Weapons (OPCW) to immediately investigate this case," the Turkish foreign ministry said Sunday.

On Sunday, France, the United States, Britain and several other countries called on the U.N. Security Council to meet quickly to closely study the crisis, with a meeting called for 1900 GMT on Monday.

SNHR's report last week was released on the anniversary of a regime chemical attack in the town of Khan Sheikhoun in the northwestern Idlib province last year, in which over 100 people were killed and hundreds more injured.

The Syrian regime has carried out 11 chemical attacks since the Khan Sheikhoun attack, according to SNHR.

Videos distributed by opposition activists show corpses lying in the streets and others convulsing and suffocating. Medics at the scene said patients suffered from symptoms such as fainting, vomiting and foaming at the mouth, similar to those of previously recorded chemical weapons attacks.

Use of chlorine as a chemical weapon is prohibited under the 1997 Chemical Weapons Convention. If inhaled, chlorine gas turns into hydrochloric acid in the lungs and the buildup of fluids can drown victims.

The use of chemical weapons has become systematic in Syria's seven-year war, but political rifts between Western powers and Russia have hamstrung the United Nations and the Organization for the Prohibition of Chemical Weapons (OPCW), leaving them unable to act against violations of international law.

The Hague-based Organization for the Prohibition of Chemical Weapons (OPWC) said previously it had evidence of the use of chlorine gas in repeated regime attacks in Syria. The OPWC said there had been a spate of new allegations of chlorine attacks several times. The regime had agreed to destroy its chemical weapons in 2014, following global outrage over a sarin gas attack in the Damascus suburb of Ghouta in August 2013 that killed hundreds in the worst attack of its kind for quarter of a century.