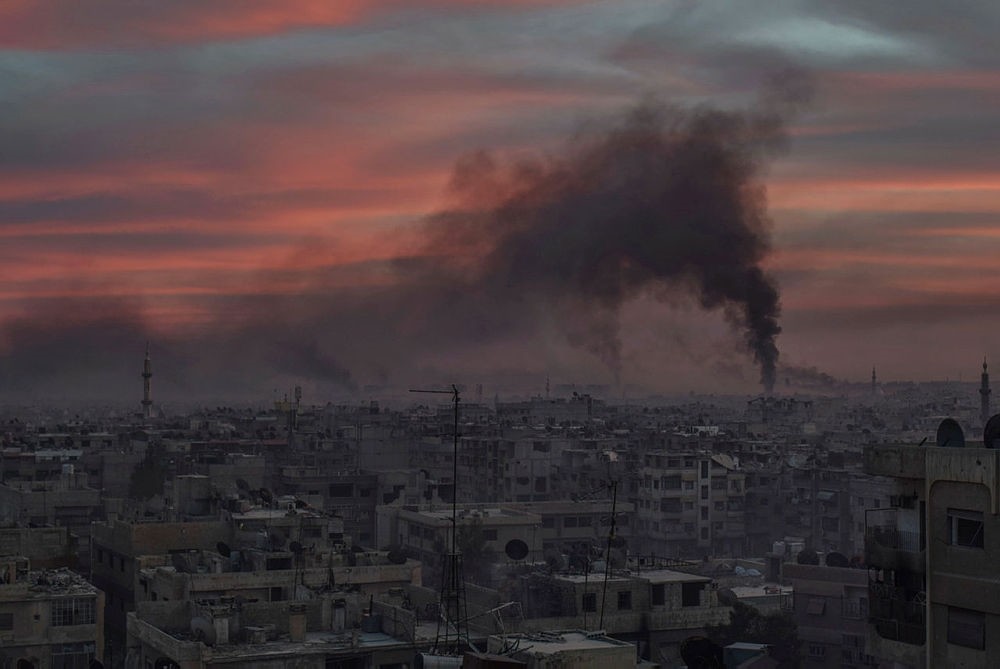 "The Assad regime and its allies carry on with their crimes," the opposition group's military spokesman Hamza Birqdar told al-Hadath TV.

Cases of suffocation between the civilians in residential neighborhood in the city #Douma after it was targeted by poison gas "Chlorine". @SyriaCivilDefe teams are working to inspect the place and transfer the injured to medical centers. pic.twitter.com/07FrrKns31

The Syrian Observatory for Human Rights, a war monitor based in Britain, reported 11 cases of symptoms of suffocation in the city, including five children, following strikes by Assad regime warplanes. It did not say what agents may have been used in the attacks.

Meanwhile, local sources said at least 70 people were killed and 1000 more were injured from the attacks.

The death toll is expected to rise to "well over 100," the charity Union of Medical Care and Relief Organizations (UOSSM) said Sunday.

"Many of the victims were women and children and experienced symptoms consistent with inhaling toxic gas," it said in a statement.

"Some of the symptoms victims experienced include cyanosis; foaming of the mouth; cornea irritation; and the strong odor of a chlorine-like substance.

"The death toll is expected to rise to well over 100 victims as Syrian Civil Defense teams have experienced extreme difficulty reaching victims due to the continued bombardment on Douma," it continued.

The disturbing photos coming from Douma also showed a number of civilians, including children, suffering breathing difficulties and other symptoms of indicative of exposure to chemical compounds.

Neither the opposition group nor the Observatory mentioned any deaths.

The regime launched a fierce air and ground assault on Douma, the last rebel-held town in eastern Ghouta, on Friday, killing 48 people in the last 24 hours alone.

State TV showed thick clouds of smoke rising from Douma, where Jaish al-Islam is holding out after insurgents in other parts of eastern Ghouta accepted offers of safe passage to opposition-held areas in the north of the country.