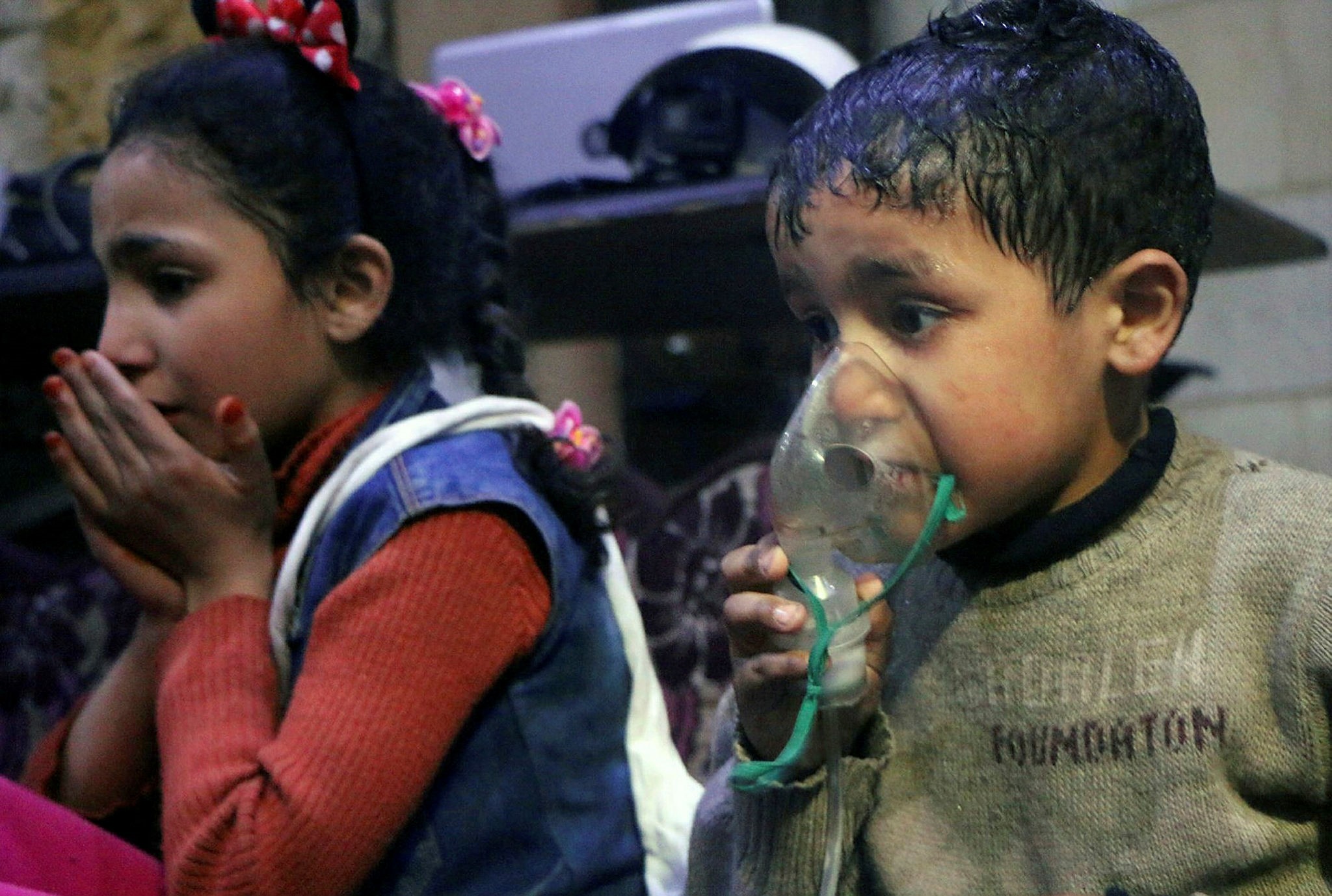 A Syrian child receives oxygen through a respirator following a chemical attack in the opposition-held town of Douma, April 8.
by Yusuf Selman İnanç Apr 09, 2018 12:00 am

In a new chemical attack on late Saturday, the Syrian regime killed dozens of people in Douma, a besieged town near Damascus, as a major offensive continues to recapture the town

On Saturday night, the world witnessed and silently watched the killing of dozens of civilians by the Bashar Assad regime with chemical weapons. Despite some half-hearted condemnations that were given based on different interests in the war-torn country, once more the international community has failed to prevent the regime from employing chemical weapons against innocent civilians. It is very likely that this chemical attack will be left like the others – an international investigation is destined to remain fruitless. Dozens of people were killed in the besieged town of Douma, near Damascus, and local medics are saying it was unquestionably a toxic gas attack.

Several videos and graphic images, circulating on social media, showed burned bodies and suffocating people; most were children, whose bodies are more vulnerable. While the attack killed more than 40 people directly, the death toll was on the rise, exceeding 80. Hundreds of people were wounded. Due to the lack of medical equipment and doctors, the wounded people were treated in very poor conditions. Douma, along with East Ghouta, is one of the cities, kept under besiegement by the regime.

Siraj Mahmoud, a spokesman for White Helmets told the Associated Press (AP) "the government was also targeting homes, clinics, and first responder facilities with conventional explosives and barrel bombs. Most of the medical points and ambulances of the town have been put out of service." "In a joint statement, the Syrian American Medical Society, the relief organization, and Douma's civil defense service said medical centers had received more than 500 cases of people suffering breathing difficulties in Douma on Saturday evening, frothing from the mouth and smelling of chlorine," Reuters reported.

A Syrian journalist told the Guardian, "The bombing in my area was particularly intense because there are medical points there, and the gas was dropped on a nearby building. The families were hysterical, I went to a medical point that is an underground hospital, and in the tunnels the dust was filling the area and there were women, children and men in the tunnels. When I arrived at the medical point it was like judgment day, people walking around in a daze not knowing what to do, women weeping, everyone covering themselves with blankets, and the nurses running from victim to victim."

Expectedly, Syria's state-run news agency SANA denied the allegations and said that were "fabrications" by the Jaish al-Islam, calling it a "failed attempt" to block government advances. Unsurprisingly, Russia, the main backer of the regime along with Iran, dismissed the reports. "We decidedly refute this information," said Major-General Yuri Yevtushenko, head of the Russian peace and reconciliation center in Syria. "We hereby announce that we are ready to send Russian specialists in radiation, chemical and biological defense to collect information, as soon as Douma is freed from militants. This will confirm the trumped-up nature of these statements," Yevtushenko added.

Yesterday, the regime also said it was ready for negotiations with Jaish al-Islam. However, other reports said the regime was still bombing the town as it started a major offensive to recapture Douma two weeks ago. "Assad's forces renewed their assault on Douma, the last rebel-controlled town in Eastern Ghouta, on Friday after talks over an evacuation of Jaish al-Islam fighters broke down. The regime has used a fierce military onslaught and two negotiated withdrawals to retake control of 95 percent of Eastern Ghouta, once the main rebel stronghold close to Damascus. It appeared last week that Douma would follow suit, with the evacuation of hundreds of rebels and their families, but there were reports of divisions among the rebels with hardliners refusing to go," Agence France-Press (AFP) reported.