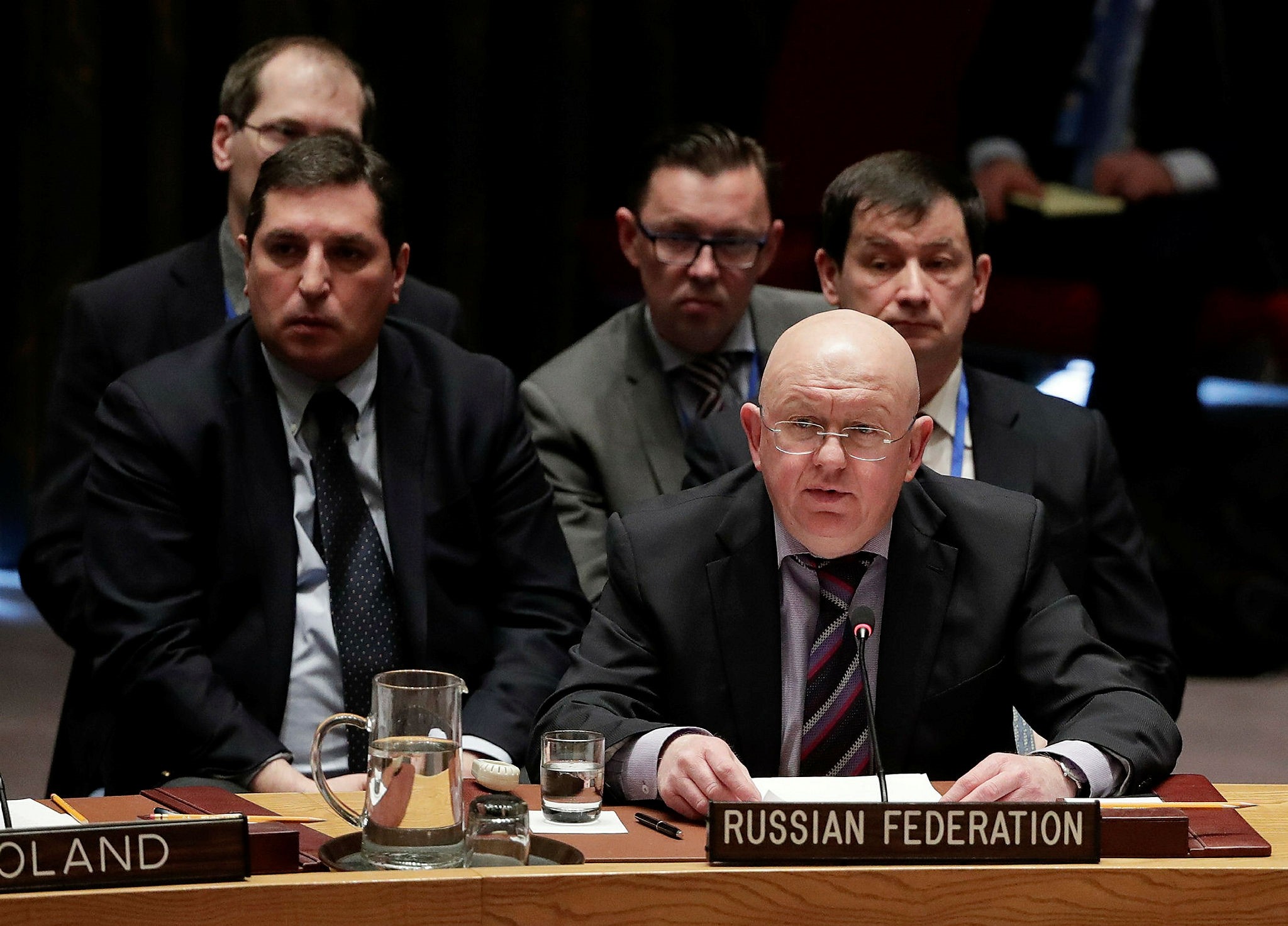 Russian Ambassador to the United Nations Vasily Nebenzya, right, talks before a vote during a Security Council meeting, Tuesday, April 10, 2018, at United Nations headquarters. (AP Photo)
by Compiled from Wire Services Apr 10, 2018 12:00 am

A draft resolution requires nine votes to be adopted in the 15-member council and no veto from the five permanent members -- Britain, China, France, Russia and the United States.

Earlier in the day, Russia vetoed a U.S.-drafted United Nations Security Council resolution that would have set up an investigation into chemical weapons use in Syria following the alleged toxic gas attack in Douma.

It was the 12th time that Russia used its veto power at the council to block action targeting its Syrian ally.

The showdown between the United States and Russia at the United Nations came as the threat of Western military action in Syria loomed large.

President Donald Trump has warned that there will be a "big price to pay" for the alleged use of toxic gas in Douma that killed at least 40 people, according to Syrian medics and rescuers.

Ahead of the vote, U.S. Ambassador Nikki Haley said "this resolution is the bare minimum that the council can do to respond to the attack" on Saturday.

Russian Ambassador Vassily Nebenzia accused the United States of "planting this resolution" as a "pretext" to justify action against the Syrian regime.

"We are using the veto in order to protect international rule of law, peace and security, to make sure that you do not drag the Security Council into your adventures," Nebenzia said.

Twelve of the 15 council members backed the U.S.-drafted measure, including France, Britain, African countries, Kazakhstan and Kuwait. Bolivia voted against the draft resolution, while China abstained.

The United States, France and Britain were among the seven countries that voted against the Russian proposal which they argued would not create an independent panel to investigate allegations of chemical weapons use.

Russia also presented a third draft resolution for a vote that would support an investigation by the Organization for the Prohibition of Chemical Weapons, but would not create a mechanism to identify the perpetrators.

The measure also failed to pass.

Russia and the Assad regime have called for the OPCW to send its experts to the opposition-held town of Douma, where toxic gas was allegedly used in an attack on Saturday that killed dozens.

The OPCW has said the team of experts will deploy to Syria shortly.

The U.S. proposal would have revived the work of a previous panel, known as the Joint Investigative Mechanism (JIM), that shut down in November when Russian vetoed the renewal of its mandate.

That panel had found that the Syrian regime air force had dropped sarin on the village of Khan Sheikhoun in April of last year.