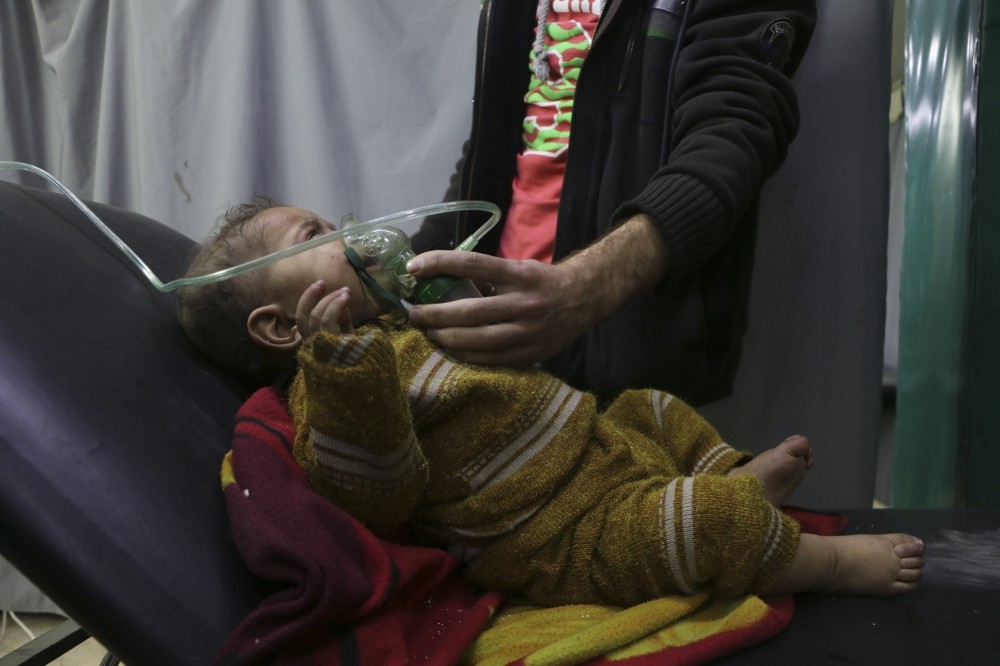 A man gives oxygen through a respirator to a child affected by the chemical attack in Douma.
by Compiled from Wire Services Apr 10, 2018 12:00 am

From France, the United Kingdom to the United States, Western countries were unanimous in condemning the chemical attack in Eastern Ghouta blamed on Syrian regime forces, while France and the U.S. weigh a response

A statement from French President Emmanuel Macron's office said yesterday it would work closely with the United States on a response to the attack and that both countries agreed responsibility for the strike must be established. Presidents Macron and Donald Trump agreed during a telephone call on Sunday that chemical agents were used in the deadly attack on April 7, the Elysee Palace said in a statement. Trump, meanwhile, will confer with U.S. military leaders on the next step to take in the face of the attack. The assault on Douma in Eastern Ghouta will be a test of Macron's credibility after he issued repeated warnings that "France will strike" if it is proven chemical attacks have been used with lethal effect in Syria. Macron and Trump "exchanged information and analysis confirming the use of chemical weapons," the French presidency said.

The French readout of the conversation stopped short of apportioning blame on forces loyal to Assad for the attack, which one Syrian aid agency said killed at least 60 people. "All responsibilities in this area must be clearly established," the Elysee statement said. It added that Macron and Trump had instructed their teams to deepen exchanges in the coming days and co-ordinate their efforts at the U.N. Security Council on Monday. The two will discuss the subject again within 48 hours, it said. The White House readout was more robust. It said the two leaders had agreed, "The Assad regime must be held accountable for its continued human rights abuses," and pledged to "coordinate a strong, joint response."

President Trump, meanwhile, was set to confer with senior military leaders late Monday, the first day on the job for his new national security adviser, John Bolton, who once advocated significant airstrikes against Syria.

Republican Sen. John McCain of Arizona said Assad heard Trump's signal that he wanted to withdraw from Syria and, "emboldened by American inaction," launched the attack. In a statement, McCain said Trump "responded decisively" last year with the air strike and urged Trump to be forceful again to "demonstrate that Assad will pay a price for his war crimes."

Trump's homeland security adviser, Thomas Bossert, noted on ABC's "This Week" the timing of the suspected chemical attack; almost a year to the day of the U.S. missile strikes. Asked about the potential for an American missile strike in response, Bossert said: "I wouldn't take anything off the table. These are horrible photos. We're looking into the attack at this point." U.S. Defense Secretary Jim Mattis said he would not rule out "anything" at this point. "The first thing we have to look at is why are chemical weapons still being used at all when Russia was the framework guarantor of removing all the chemical weapons. And so, working with our allies and our partners from NATO to Qatar and elsewhere, we are going to address this issue," Mattis said before the start of a meeting with Qatar's Emir in Washington yesterday. Mattis had been asked if the U.S. was capable of striking President Syrian President Bashar Assad's chemical weapons facilities. When asked if he could rule out taking actions, like launching airstrikes against Assad, Mattis said: "I don't rule out anything right now."

Speaking with his French counterpart Jean-Yves Le Drian on the phone, Johnson "underlined the urgent need to investigate what had happened in Douma and to ensure a strong and robust international response," the Foreign Office said in a statement. The two "agreed that those responsible for this attack must be held to account" and a U.N. Security Council meeting on Monday would be "an important next step in determining the international response and that a full range of options should be on the table," it added.

Prime Minister Theresa May's spokesman called reports of a chemical weapons attack "deeply disturbing" and said Britain would work with its allies on "a coordinated approach."