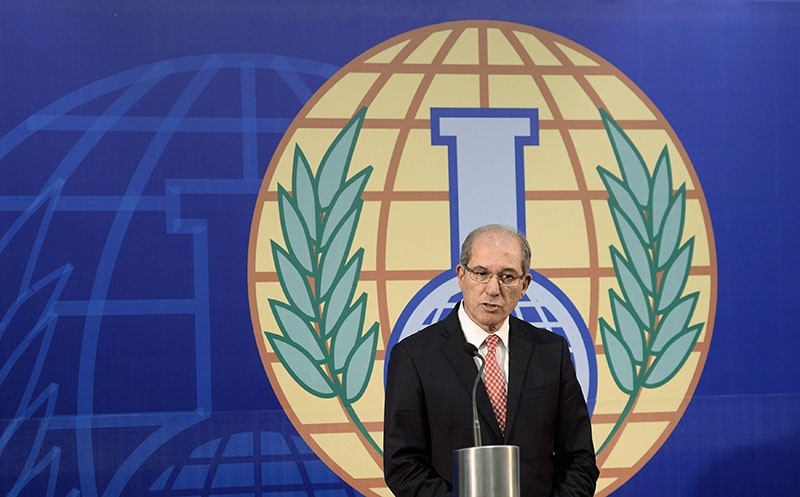 Organisation for the Prohibition of Chemical Weapons (OPCW) Director General Ahmet u00dczu00fcmcu00fc speaking during a news conference in The Hague October 9, 2013. (Reuters Photo)
by Daily Sabah with DPA Apr 11, 2018 12:00 am

A delegation set to consist of 10 experts will soon head to Syria to investigate the alleged chemical weapons attack in Douma, the head of the Organization for the Prohibition of Chemical Weapons (OPCW) told Turkish media on Wednesday.

Local sources and NGO's working in the area said that at least 70 people were killed and dozens of others were injured in Saturday's alleged chemical attack by Assad regime forces in the eastern Ghouta town of Douma near Syria's Damascus.

The results of the investigation could take a month to materialize, Ahmet Üzümcü, a Turkish career diplomat and the director-general of the OPCW, said in an interview with Turkish broadcaster NTV.

The experts on the mission will conduct interviews with the alleged victims and collect samples to be examined at the OPCW's laboratories.

Üzümcü said that the OPCW initially looked into the seriousness of the chemical attack claims after the attack and concluded that they are serious.

At first there were claims of chlorine gas use in the attack, and then allegations on nerve agent use emerged, Üzümcü said, adding that they have been setting up a team and preparing to ask for permission for a probe in the area when the regime invited them to Douma.

As it looked to head off the threat of Western strikes, the Syrian regime said it had invited the OPCW to visit the site of the alleged attack in Douma, a town in the Damascus suburb of eastern Ghouta that is on the verge of falling to the regime after a long and bloody siege.

The OPCW does not have a mandate to establish who is responsible for attacks, and the joint OPCW-UN task force that once did was shut down by Russia last year after it blamed the Syria regime.

Damascus agreed to hand over its chemical arsenal in 2013, narrowly avoiding American and French air strikes in retaliation for a suspected sarin attack.

The deal brought a Nobel Peace Prize to the OPCW in 2013 under Üzümcü's mandate.