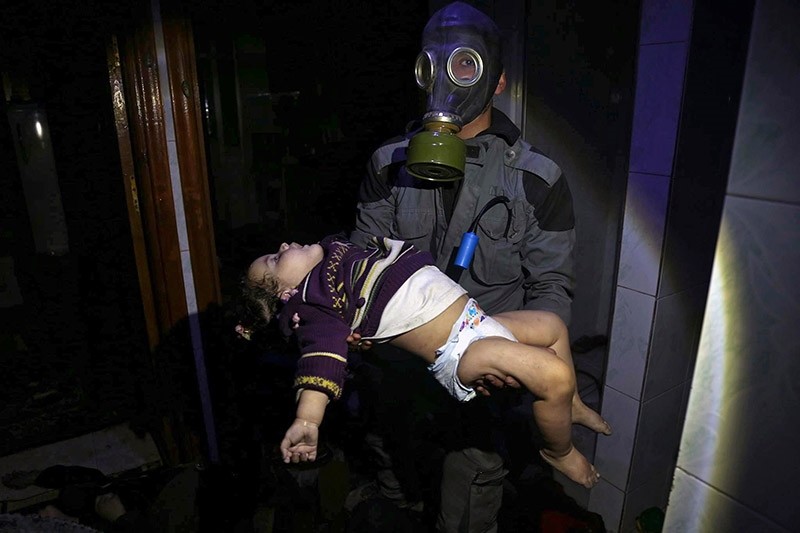 This Sunday, April. 8, 2018 file image released by the Syrian Civil Defense White Helmets, shows a rescue worker carrying a child following an alleged chemical weapons attack in the rebel-held town of Douma, near Damascus, Syria. (AP Photo)
by Apr 12, 2018 12:00 am

A top Syrian opposition official told AFP on Thursday that his faction only agreed to abandon its battered enclave outside Damascus because of an alleged toxic gas attack.

"Of course, the chemical attack is what pushed us to agree" to a withdrawal from Douma, said Yasser Dalwan, a high-ranking member of Jaish al-Islam.

It was the first public acknowledgement by Jaish al-Islam of a deal reached for Douma, their last opposition holdout in the eastern Ghouta suburb of Damascus.

The agreement was announced on Sunday morning by the Assad regime and its ally Russia, just hours after toxic gases were allegedly released on Douma.

First responders there said more than 40 people died Saturday after suffering symptoms consistent with chemical exposure, including wheezing, discolored skin and foaming at the mouth.

World powers have threatened a strong response, with French President Emmanuel Macron saying Thursday he had "proof" the Assad regime was behind the attack.

The regime and its ally Russia have both denied the accusations, and the global chemical watchdog said it would deploy a team to investigate.

Analysts have said Bashar al-Assad may have used toxic gas to terrify Douma's residents and push opposition fighters to withdraw without a fight.

Jaish al-Islam had long insisted that it would refuse to agree to an evacuation deal for Douma.

But since the alleged attack, several thousand opposition fighters and civilians have left Douma for opposition-held territory in the north.

They included Jaish al-Islam's chief Issam Buwaydani, according to the Syrian Observatory for Human Rights, a Britain-based monitoring group.

"Not all the leadership has left yet. Departures are ongoing," Dalwan told AFP.