Russian ships have left Tartus base in Syria for own safety: official 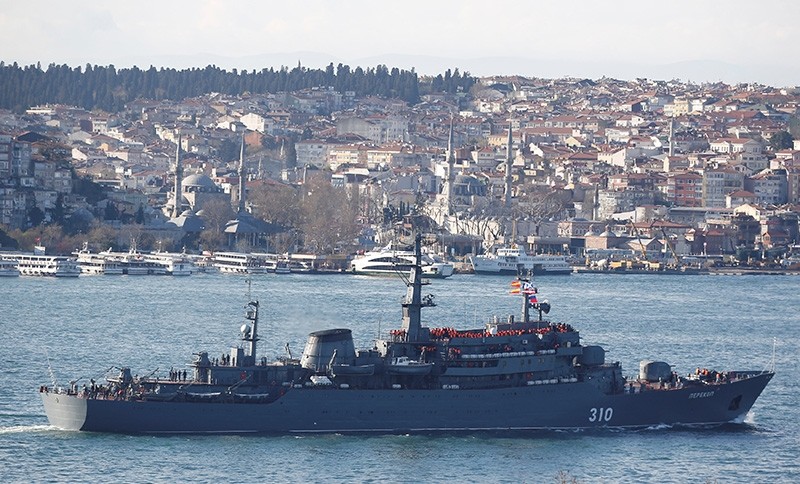 Russian ships have left the Tartus naval base in Syria, Interfax news agency quoted a Russian lawmaker as saying on Thursday.

Vladimir Shamanov, who chairs the Russian defense committee of the lower house of parliament, said the vessels had left the Mediterranean base for their own safety, adding that "this is normal practice" when there are threats of an attack, the news agency reported.

As the threat of Western military action against the Syrian regime looms, Russia has already deployed thousands of troops in the war-torn country to back President Bashar al-Assad.

President Vladimir Putin first launched a military intervention in Syria in 2015, turning the tables in the multi-front civil war in favor of ally Assad.

The regime and its Iranian and Russian allies increasingly appear to be on the path to victory in Syria's brutal seven-year civil war, while the West has been reluctant to engage militarily.

The precise number of Russian troops fighting in Syria is not known.

Putin said in December that some 48,000 Russian servicemen have taken part in the campaign.

He has ruled out dispatching ground troops in Syria, making the air force the mainstay of Moscow's Syria campaign.

Bomber planes such as the Tu-22 and Tu-160 have also flown from Russia to hit targets in Syria.

Officials have acknowledged the presence of Russian advisors and military police in Syria, however.

In March, the defense ministry said a total of 2,954 Russian troops in Syria had voted in presidential polls, giving an idea of current numbers.

In December Putin made a surprise visit to Russia's Hmeimim air base in Latakia, Syria where he ordered a partial pullout of the country's troops, saying their task had been largely completed.

Russia said the air base, set up in 2015, would remain in operation permanently, while its naval facility in the Syrian port of Tartus would be expanded.

Three battalions of military police and officers of the Russian Centre for Reconciliation would remain in Syria, Defense Minister Sergei Shoigu said.

The Hmeimim air base on the western coast and the naval facility in Tartus have been protected by S-300 and S-400 air missile defense systems.

Russian warships and submarines have also played a prominent role backing up the bombing campaign in Syria, firing missiles at Daesh terror group targets from the Mediterranean.

The Russian defense ministry has previously said it will fire at any U.S. craft that strikes government areas of Damascus, where Russian officials are also based.

Putin first said in March 2016 that the country's military campaign in Syria was coming to an end.

Officials and observers also point out the presence of a "shadow army" of Russian mercenaries in Syria, including those working for a private military company called Wagner.

Military expert Felgenhauer last year estimated the number of mercenaries at 2,000 to 3,000.

Moscow in March acknowledged five Russian nationals were killed and "dozens" wounded in U.S. strikes on an area where no official troops were present, saying they all were in Syria "on their own initiative."

Russia has officially acknowledged 84 military losses in the Syrian war, including 39 killed in a plane crash at Hmeimim in March that was not caused by military action.